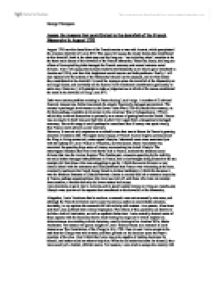 Assess the reasons that contributed to the downfall of the French Monarchy in August 1792 August 1792 saw the demolition of the French armies at war with Austria, which precipitated the eventual downfall of Louis XVI. This essay will assess the major factors that contributed to this downfall, both in the short term and the long run. I am including what I consider to be the three main causes of the downfall of the French Monarchy. These are; firstly, the long run effects of how spiralling debt damaged the French economy and caused extreme social division. Also I will assess the decision made by the Monarchy as to why to go to war (both in Austria and USA), and how this heightened social tension and debt problems. Finally, I will also explain how the actions of the Monarchy himself can be assessed, and to what extent they contributed to his downfall. It would be wrong to place the downfall of the Monarchy on one single factor, and inevitably all the factors I have mentioned contributed significantly in some way. However, I will attempt to make a judgement as to which of the issues contributed the most in the downfall of King Louis XVI. Debt was a serious problem existing in France during Louis' reign. A number of ill advised financial manoeuvres further desiccated the already financially damaged government. The country's prolonged involvement in the Seven Years War (1756-63) drained the treasury, as did their perhaps avoidable involvement in the American War of Independence 1775-83, which they involved themselves in primarily as a means of getting back at the British. ...read more.

The king's attempt to run away, however, made it clear to sceptics that he was willing to turn his back on the constitution and his position as a constitutional monarchy at any moment. The more radical revolutionaries, who had never wanted a constitutional monarchy, trusted the king even less after his attempted escape. The more moderate revolutionaries, who once were loyal supporters of the constitutional monarchy, found themselves in a difficult situation to defend the monarch, when he was abandoning his responsibilities. Therefore, although Louis legally still retained some power after being returned to Paris, it was clear that his days were numbered. This brings me to my next point that Louis himself was perhaps not suited to the role of the monarch. In my opinion, it is a weak perception that absolutism can possibly work to run a country with the prestige and size of France effectively. Louis was not elected for his talents as a leader, but rather that he was seen as more of a 'chosen one' by god. He inherited the throne, and with that he also inherited absolute power. In a country such as France at the time, with the Ancien Regime society that was adopted, it would be near impossible in my opinion to satisfy the needs of the majority of society. Louis was set a difficult task, but I also think that his inability to make decisions for himself, and thus managing to anger almost every social group in society, he did not make matters easy for himself by any means. ...read more.

But Louis' rash decisions throughout his reign, his reluctance to reform, as well as the economic ruin that he had left France in throughout, made him an easy target to blame for French loss. I don't think that Louis as a person was suited to the role of the King of France, and I will again make the point that I do not feel that Absolute Monarchy can work under any circumstances, and if it was to be effective it would require a Monarch with great leadership qualities, immense charisma, and good knowledge of what to do in difficult situations. In my opinion, Louis was not charismatic (certainly towards the end of his reign), he did not have great leadership qualities, we see this as he sends his men to their deathbeds, and by no means in my opinion is he effective in difficult situations. Therefore, critics may argue that he was placed an impossible task, I feel that even if the task were possible, as a person Louis was not the man needed to fulfil it by any means. Therefore, I will finally conclude by saying that I feel that Louis' decisions, his personality and character, are the main issues that should be raised when discussing why exactly the monarchy witnessed a downfall in August 1792. The other reasons I have mentioned are also very significant, but perhaps could have been more successfully avoided, had the King been more able to make good decisions for the good of the whole nation, and been more wise with his money. George Thompson ...read more.