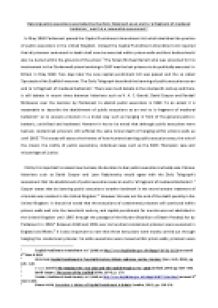 Banning public executions was hailed by the Daily Telegraph as an end to 'a fragment of medieval barbarism,' was this a reasonable assessment?

The Times' newspaper report of Michael Barrett's execution reported that 'so the concourse broke up with its usual concomitants of assault and robbery'.[10] Evidently public executions resulted in crime, rioting and general disorder. There are also various negative descriptions of the crowd from first hand witnesses. For instance the Rev S. G. Osbourne, who described the people who attended public executions as the 'very scum of mankind' and stated that 'their fearful language, people to whom it is a sort of gala day, men and women blaspheming, singing obscene songs, with half drunken jollity coming to riot below the gallows'.[11] In addition a police officer testified in 1856 that the crowd responded to executions with 'all kinds of levity, jeering, laughing, hooting, whistling, while he is still struggling and his body is withering there is still these noises going on', while Lord Henry Lennox complained that 'they were joking, laughing, pelting oranges, bonneting each other, throwing hats in the air and hailing these practical jokes with burts of laughter'.[12] It is fair to say that public executions attracted the wrong sort of crowds and McGowan's argument that the audience 'came in the wrong frame of mind' is clearly true from the inappropriate behaviour displayed by the crowd. Therefore this suggests that the Daily Telegraph's assessment that banning public executions was an end to 'a fragment of medieval barbarism' was a reasonable assessment. ...read more.

The decision to ban public executions was part of a civilising process to an extent as exposing the general public to the brutal death of hanging was uncivilised and backward. However prisoners still suffered the same brutal and barbaric method of hanging just now in within prison walls rather than in public. In some cases condemned prisoners arguably suffered even worse in private than in public, one example of this being the execution of James Goodale in 1885. Therefore capital punishment in the United Kingdom was clearly was not made more humane by banning public executions. In addition shocking individual cases such as Edith Thompson's continued to emerge. Edith Thompson was convicted without concrete evidence by a male dominated jury and appeared to be pregnant at the time of execution, which is something that should not happen in a civilised and humane legal system. Furthermore continuation of the death penalty inevitably to miscarriages of justice in which innocent people suffered the brutal death of hanging, an example being Derek Bentley, which again is uncivilised and barbaric. Overall it is clear that banning public executions was a step forward, there was still a long way to go as the continuation of the practice of hanging was barbaric and medieval. Therefore banning public executions was not an end to a fragment of medieval barbarism. ...read more.