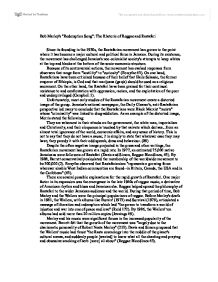 Bob Marley's &quot;Redemption Song&quot;: The Rhetoric of Reggae and Rastafari

Bob Marley's "Redemption Song": The Rhetoric of Reggae and Rastafari Since its founding in the 1930s, the Rastafarian movement has grown to the point where it has become a major cultural and political force in Jamaica. During its existence, the movement has challenged Jamaica's neo-colonialist society's attempts to keep whites at the top and blacks at the bottom of the socio-economic structure. Because of its controversial actions, the movement has evoked responses from observers that range from "hostility" to "curiosity" (Forsythe 63). On one hand, Rastafarians have been criticized because of their belief that Haile Selassie, the former emperor of Ethiopia, is God and that marijuana (ganja) should be used as a religious sacrament. On the other hand, the Rastafari have been praised for their continual resistance to and confrontation with oppression, racism, and the exploitation of the poor and underprivileged (Campbell 1). Unfortunately, most early studies of the Rastafarian movement create a distorted image of the group. Jamaica's national newspaper, the Daily Gleaner's, anti-Rastafarian perspective led many to conclude that the Rastafarians were Black Marxist "racists" whose "criminality" was linked to drug-addiction. As an example of the distorted image, Morris stated the following: They are vehement in their attacks on the government, the white man, imperialism and Christianity, and their eloquence is touched by that naivete which derives...from an almost total ignorance of the world, economic affairs, and any sense of history. This is not to say that they do not have a cause; it is simply to state that whatever case they may have, they parody it with their odd speech, dress and behaviour. (89) Despite the often negative image projected in the press and other writings, the Rastafarian movement has grown at a rapid rate. In 1977, an estimated 75,000 native Jamaicans were followers of Rastafari (Davis and Simon, Reggae Bloodlines, 63). By 1988, Barrett conservatively calculated the membership of the worldwide movement to be 300,000 (2). ...read more.

In "Exodus" (Exodus), Marley makes a direct statement about the exodus to Zion: "Open your eyes and look within/Are you happy with the life you're living/We know where we are going/We know where we are from/We're leaving Babylon/We're going to our Father's land/Exodus!" Marley describes the repatriation of Rastafari only in vague terms. Is leaving Babylon a physical exodus or merely mental liberation from oppression? Is Zion in Africa? Or is Zion merely the unification of non-Babylon followers? While repatriation is a familiar theme in Marley's lyrics, music also plays a powerful role in the concept of freedom. On one level, music has the power to dull pain. The opening lines to "Trenchtown Rock" (Live!) are: "One good thing about the music/When it hits/Ya feel no pain." In "Them Belly Full" (Natty Dread): "We're going to dance to Jah music--dance/...Forget your sickness and dance/Forget your weakness and dance." Finally, in "Three Little Bird" (Exodus), Marley wakes up to birds singing "a melody so sweet" with the message that "everything is going to be alright." In other songs, music can be used as means of freeing the oppressed. One example is "Trench Town" (Confrontation): "We free the people/With music, sweet music/Can we free the people with music/Can we free our people/With music, with music." Therefore, reggae music is described as having the power to free the oppressed people from the pain of their captivity. The essential difference between OPPRESSION and FREEDOM is based on the orientation of the metaphor. A down metaphor of oppression implies low-status individuals who are chained to the poverty and the suffering of the concrete jungle. An up metaphor of freedom implies high status individuals who have the power of a bird to remove themselves from the surroundings of the downpressor. 3. WAR Another prominent metaphor is WAR. The cluster spotlights vehicles like: "riots," "demonstrations," "killing," "struggle," "revolution," "battle," "courage," "raging," "looting," "burnin'" "ambush," "fallen fighters," "freedom fighters," and "shot down." ...read more.

Reggae's power as protest music reflects not only the lyrics of oppression and redemption, but the aesthetic qualities of its third-world sound. Consequently, more research is needed in the area of measuring the effectiveness of protest music on both the lyrical and musical levels. Most of the existing research is concerned with the function, rhetorical limitations and effectiveness of protest music from a lyrical standpoint. Rein and Springer argue that by ignoring musical dimensions, researchers "disregard much of its meaning and impact" of the music (252). They propose that early efforts regarding popular music focused primarily on the lyrical content resulting in a one-dimensional perspective. By expanding the "traditional filter" (Rein and Springer 254) of lyrical aspiration, researchers may discover the communication power of music in transcending boundaries or creating social entities such as subcultures and folk traditions (Chaffee 413). In addition, critics must be able to go beyond a descriptive discussion of the music. Critics must be able to use the specialized skills of an ethnomusicologist to analyze various musical structures. In his analysis of Dixieland jazz, Holmberg argues that a "close scrutiny of the music of a single song can help us understand how it achieves its persuasive impact" (74). Holmberg analyzes the song's melodic structure, chord progression, rhythm and the nature of the instrumental source. Finally, scholars should examine the concept of sound in metaphor. A review of the existing research shows an exclusive preoccupation with discursive communication. An analysis focusing on the musical variables of melodic structure, chord progression and rhythm could produce the interpretation needed for identifying and sorting of metaphors. For example, it has been suggested that most African-American based music has two conflicting metaphors: wailing and tranquility. Studies of a variety of musical forms may show the universality of metaphors. In any case, Bob Marley's rhetoric of redemption demonstrates the power of reggae music as a "metaphor" for human rights, freedom and unity. Added material Stephen King, Division of Language and Literature, Delta State University, Cleveland, MS 38733. Richard Jensen, School of Communication, University of Nevada--Las Vegas. ...read more.