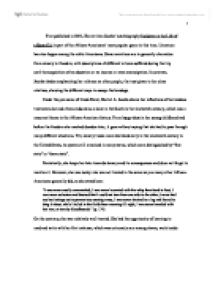 First published in 1861, Harriet Ann Jacobs' autobiography Incidents in the Life of a Slave Girl is part of the African-Americans' most popular genre in this time. Literature has also begun among the white Americans. Slave narratives are in generally chronicles from slavery to freedom, with descriptions of different tortures suffered during the trip until the acquisition of an education or an income or even emancipation. In contrast, Jacobs shades emphasizing her reliance on other people, the trust given to her close relatives, showing the different ways to escape the bondage. Under the pen name of Linda Brent, Harriet A. Jacobs shares her reflections of horrendous treatments she and others endured as a slave in the South in the nineteenth century, which was a recurrent theme in the African-American history. From happy days in her young childhood and before the freedom she reached decades later, it goes without saying that she had to pass through many different situations. Yet, slavery trades were abolished early in the nineteenth century in the United States, its system still remained in many states, which were distinguished by "free state" or "slave state". Persistently, she keeps her hate towards slavery and its consequences and does not forget to mention it. ...read more.

stated above, they could receive in the case of a capture; and the passage of Nat Turner's rebellion, which relatively succeeded by about fifty white men, women and children killed in a day even if he was arrested soon after the begun his resistance to oppression. The reader is also told about different movements, small but important, such as the Anti-Slavery Society, who helped her and her friend to get to New York safely, supporters of women's rights, help of the blacks from both the North and the South, and without forgetting the opponents of slavery in England. "Slavery is terrible for men; but it is far more terrible for women." (p. 119) On a slave trade, men were worth their performance at work. For the women, their value is not only based on their work but also on their ability to serve the household. Always speaking through the narrator Linda Brent, Jacobs exposes the cruelties towards slave women: submission to her master, motherhood without the right to marry the father, and dispersal of the family members. Besides this issue, she also raised the constant threat of the Fugitive Slave Law of 1850 in the North, which permitted the return of slaves who escaped from one to another state but could not longer guarantee freedom or safety, hence the several back and forth during her journey in the North. ...read more.

The related facts seemed so impossible but she succeeded in keeping the reader's attention until the end. An interesting thing is that this book can be read from different points of view. I have read it on focusing the several paths she took to escape, but going further, on one hand we can find an expression of the strong relationship between Linda and her grandmother, who enrolled as a mother and a confident. She had to fight for freedom, and as a mother, this responsibility is even more emphasized. She was torn between freedom and staying by her grandmother's side and finally chose to her responsibilities. On the other hand, there is also a representation of the strong support between women: at first, with her first mistress, then her grandmother. It is particularly apparent with Mrs. Bruce, an old woman who hired her as a maid in New York, and did not hesitate to entrust Linda her child for the several escapes, a strategy that could allow her to come back if she would have been caught. The whole content deeply touched me. I thought that bondage consisted only in serving the master and being punished and tortured each time the slave has mistaken. There is more besides this. I have learnt a lot more and from now, I imagine the slavery conditions quite differently. ?? ?? ?? ?? 1 ...read more.