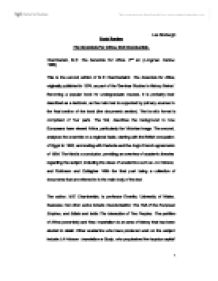 Lee Roxburgh Book Review The Scramble For Africa, M.E Chamberlain. Chamberlain, M,E. The Scramble For Africa. 2nd ed. (Longman. Harlow. 1999). This is the second edition of M.E Chamberlain's The Scramble for Africa, originally published in 1974, as part of the 'Seminar Studies in History Series'. Becoming a popular book for undergraduate courses, it is probably best described as a textbook, as the main text is supported by primary sources in the final section of the book (the documents section). The book's format is comprised of four parts. The first, describes the background to how Europeans have viewed Africa, particularly the Victorian image. The second, analyses the scramble on a regional basis, starting with the British occupation of Egypt in 1882, and ending with Fashoda and the Anglo French agreements of 1904. The third is a conclusion, providing an overview of academic theories regarding the subject, including the views of academics such as J.A Hobson, and Robinson and Gallagher. With the final part being a collection of documents that are referred to in the main body of the text. ...read more.

As Chamberlain states, quoting views from 1959 and 1969: "A generation ago reputable scholars could write: 'for countless centuries, while all the pageant of history swept by Africa remained unmoved in primitive savagery' or 'perhaps in the future there will be some African history to teach. But at present time there is none: there is only the history of Europeans in Africa. The rest is darkness . . . And darkness is not a subject of history'. In this they were echoing their Lee Roxburgh Victorian predecessors."3 Nevertheless although the African background is well backed up with sources and explains the development of the African peoples including classical and Islamic influences on Africa, it sheds no new light on why the partition took place in the late nineteenth century. Also to be fair The "Scramble" for Africa: Causes and Dimensions of Africa ed by Raymond F. Betts published in 1966, does attempt to tackle the problem from the African historical perspective. Although in this period African history, had not been a separate area of study for very long. ...read more.

the author utilises a vast range of secondary sources as well as primary sources from the documents section. One minor area of criticism is that the author assumes the reader is aware of the 'Khedive',6 although this could be easily researched. The overall assessment (conclusion) given by Chamberlain provides an excellent overview of the 'scramble', logically expressed, convincing and well backed up with secondary sources as well as primary documents. It gives the reader a good insight into the existing historiography and debate on the subject as it explains theories ranging from Hobson to Cain and Hopkins British Imperialism: Innovation and Expansion. The documents referred to in the main text can be found towards the end of the book. These make an excellent addition as they include extracts from books long out of print, as well as unpublished material such as old Foreign Office documents. Others are Lee Roxburgh from academic texts and help to back up the author's argument. M. E. Chamberlains, The Scramble for Africa is easy and enjoyable to read. Although aimed at undergraduate students, anyone with an interest in British imperialism will find it accessible. ...read more.