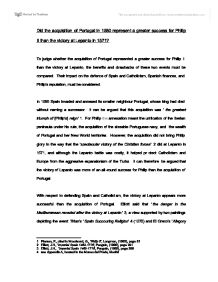 Did the acquisition of Portugal in 1580 represent a greater success for Philip II than the victory at Lepanto in 1571?

Therefore the defeat of the Turks at Lepanto, which marked the beginning of decline in Muslim threat to Catholic Europe, was a greater success for Philip in terms of protecting Spain and Catholicism than the annexation of Catholic Portugal, which on balance caused more defensive problems than it solved. However, in financial terms the acquisition of Portugal was certainly a greater success for Philip than the victory of Lepanto. McKinnon-Bell observes that 'the acquisition of Portugal brought [Philip] huge new sources of revenue' 22, something echoed in a despatch sent by the Venetian Ambassador on Philip's death in 1598, which described Philip's acquisition of 'the important kingdom of Portugal, with all its territories and treasure' 23. It is possible the Ambassador exaggerated the importance of the annexation out of respect for the recently deceased, but records of bullion import suggest that his assessment of the wealth of the Portuguese empire24 was accurate. Following the acquisition of Portugal, imports of treasure into Spain increased by 70% (from 20.7 million ducats between 1576 and 1580, to 35.2 million ducats in the five years following 158025). It seems then that the annexation of Portugal, which allowed Philip to exploit the Portuguese empire, was a triumph for Spanish finances. The victory of Lepanto, on the other hand, damaged Philip's treasury. Not only did Spain have to bear to the cost of building the 79 ships26 it contributed to the fight, it also did not gain anything financially from the victory, and there is evidence that Philip realised it would be detrimental to his finances. ...read more.

Even Elizabeth I of England (who was excommunicated from the Catholic Church in 1570 and therefore had no reason other than genuine admiration for Philip) sent congratulations after the victory44. The prestige Philip gained from the victory at Lepanto meant it was a greater success in this area than the acquisition of Portugal, which enhanced his standing in Europe only on paper. The victory of Lepanto represented a greater success than the acquisition of Portugal for Philip in terms of defence of Spain and Catholicism, as well as in glorifying himself and his empire. It reduced the immediate threat to Catholic Europe from the aggressive Ottoman empire, and was the beginning of the end of conflict between the Spanish and the Turks. The possession of Portugal, on the other hand, presented a range of new defensive difficulties: the Portuguese Atlantic coast was long and not easily protected from piratical raids, even with the addition of the Portuguese fleet. And while the victory at Lepanto gave Philip a popularity boost across Europe and helped portray Spain as a glorious empire, the acquisition of Portugal instilled fear in Spain's neighbours and did nothing positive for his reputation. It was only financially that the annexation of Portugal represented a greater success, because whilst the battle of Lepanto drained resources, the possession of Portugal brought Philip wealth from New World territories, as well as resources and revenue from Portugal herself. Comparing the two events therefore, the victory at Lepanto was a greater success for Philip than the acquisition of Portugal, because while Portugal benefited Spain financially, Lepanto improved Philip's standing in Europe, and helped ensure the safety of his people and his faith. ...read more.