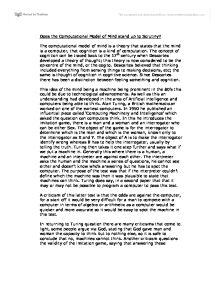 Does the Computational Model of Mind stand up to Scrutiny?

Does the Computational Model of Mind stand up to Scrutiny? The computational model of mind is a theory that states that the mind is a computer, that cognition is a kind of computation. The concept of cognition can be traced back to the 17th century when Descartes developed a theory of thought; this theory is now considered to be the epicentre of the mind, or the cogito. Descartes believed that thinking included everything from sensing things to making decisions, etc; the same is thought of cognition in cognitive science. Since Descartes there has been a distinction between feeling something and cognition. This idea of the mind being a machine being prominent in the 80's this could be due to technological advancements. As well as this an understanding had developed in the area of Artificial intelligence and computers being able to think. Alan Turing, a British mathematician worked on one of the earliest computers. In 1950 he published an influential piece called 'Computing Machinery and Intelligence' which asked the question can computers think. In this he introduces the imitation game, there is a man and a woman and an interrogator who can be either Sex. The object of the game is for the interrogator to determine which is the man and which is the woman, known only to the interrogator as X and Y. The object of A is to make the interrogator identify wrong whereas B has to help the interrogator, usually by telling the truth. ...read more.

As well these potential contributions to philosophy of mind, computational models of mind have a substantial relationship with cognitive science and artificial intelligence. The most prominent of these connections is with Chomsky; he produced a theory on linguistics that changed the way people viewed language learning. Before Chomsky there was a behaviourist view of language learning but Chomsky believed that it wasn't able to adequately explain how a child picks up grammatical rules and is able to use them in many different contexts. Chomsky speaks of the childs efforts at mastering grammar in terms of formation and then confirmation of a hypotheses. Fodor argued that to do this you would need an inner language of thought. Computationalists believed it was plausible to use these mechanisms that were used for the hypotheses and use them in computational terms. The computational model of mind is important in philosophical terms as it shows that reasoning could be a causal process but be sensitive to semantic connections between judgements. The problem with this is the belief by many that reasons are not causes. In one way how can a causal process carry on following the values of semantic propositions? To have a device that understands the meanings of mental values of a proposition is the same as having as having an interpreter inside the brain, but then the problem of reason and causation happens for this interpreter and so you end up with endless amounts of interpreters. ...read more.

At the time of many of the studies computers were in the very early stages, some being little advanced as a calculator. How do you jump from a machine for numbers to the human mind? In conclusion, the computational model of mind whilst being highly studied has a few gaps that aren't clearly explained. All the speculation of future possible machines and software holds many of the ideas back. As they are mainly theory based it is easy to criticise their success in a theoretical way. If on the other hand the software was available now, then these criticisms would have little holding. For example, in terms of the imitation game; if someone did manage to replicate the human mind, accurately and therefore this machine was able to feel anger, and to answer questions with a presupposed understanding then the experiment itself may have a little more bearing. As it was at the time Turing wasn't entirely sure whether there would ever be such a case. On a whole it seems that psychologists and philosophers alike are fascinated by the concept that the mind is a machine, there is certainly some compelling research to confirm this. I feel after weighing up the research that in today's society and the technological developments we have undergone that we are getting closer to a deeper meaning of the mind as a machine. As it stands at the moment, I feel that when answering whether it stands up to scrutiny, it is necessary to say no, at least not in all areas; There needs to be further developments. ...read more.