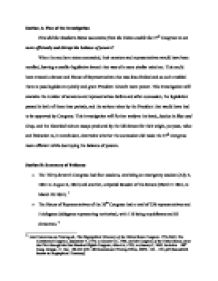 Historical Investigation -- How did the Southern States succession from the Union enable the 37th Congress to act more efficiently and disrupt the balance of powers?

Section A: Plan of the investigation How did the Southern States succession from the Union enable the 37th Congress to act more efficiently and disrupt the balance of powers? When the southern states succeeded, their senators and representatives would have been recalled, leaving a smaller legislative branch that was of a more similar mind-set. This could have created a Senate and House of Representatives that was less divided and as such enabled them to pass legislature quickly and grant President Lincoln more power. This investigation will examine the number of senators and representatives before and after succession, the legislation passed in both of these time periods, and the actions taken by the President that would have had to be approved by Congress. This investigation will further analyze the book, Justice in Blue and Gray, and the historical minute essays produced by the US Senate for their origin, purpose, value and limitation to, in conclusion, determine whether the succession did make the 37th Congress more efficient while destroying the balance of powers. Section B: Summary of Evidence ? The Thirty-Seventh Congress had four sessions, one being an emergency session (July 4, 1861 to August 6, 1861) and another, a Special Session of the Senate (March 4 1861, to March 28 1861). 1 ? The House of Representatives of the 36th Congress had a total of 238 representatives and 5 delegates (delegates representing territories), with 116 being republicans and 83 democrats. ...read more.

but is his most specialized to a time period and country as he normally deals with international issues. As stated in the foreword, Neff wrote the novel to provide a systematic overview of law and judicial practices during the civil war, in a manner that would be accessible to non-lawyers. In this regard it has value by fully describing law terms that some authors would assume were understood. However, this does have the effect of possibly over simplifying events. As a non-American citizen and having an international law background, the work is less susceptible to bias from being a partisan to the North over the South and could provide a more neutral lens than an author raised in the U.S. Limitations wise, as Confederate documents were largely destroyed, the study was restricted to analyzing solely legal situations on the Union side. Also, in regards to the purpose of the book, it sough to explore the reasoning and issues of the U.S. judicial system at the time, rather than that of Congress. Following form, bias was present if only in the diction where Neff would describe something as "melancholy" or "obsessi[ve]." Yet, it was lessened due to the fact that while sounding favorable to the South's reasons for successions, he conceded that the compact theory is not a viable judicial stand point for the country. Another reference source was the U.S. Senate's Historical Minute Essays from 1851 to 1877. ...read more.

Yet, when passed into law by Congress, this effectively subjugated the judicial branch to the executive. As if, the two branches where ganging up on the third. It must be noted that while the South's succession did eliminate one of the largest political obstacles in Congress, the drastic measures and expediency which took place was also surely a result of the war time emergencies. In peaceful times, it would be nonsensical for the legislative branch to weaken their powers on the behalf of the executive if it was not for the sake of holding the country together. The plethora of laws passed during the emergency session as well, would have been influenced by the danger posed by the army of Northern Virginia to D.C. itself and the recent loss of Bull's Run. Section E: Conclusion In conclusion, the withdrawal of the South's representatives, while not uniform, did create a one-party like legislative branch much in the same manner as with a dictatorship, leading to increased efficiency yet also increased infringement of Constitutional rights. Something which resulted from the disturbance of the balance of power supported by the 37th Congress. However, it cannot be said that this was the only factor attributing to the quantity of laws drafted. The war time state expedited mainly those laws pertaining to the war, while the removal of the vast body of Democrats expedited those laws platformed by the remaining Congress. It was the combination of these factors that characterized the unusual efficiency and overall dynamic of this historic Congress. ...read more.