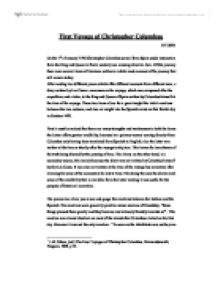 First Voyage of Christopher Columbus. 15132836 On the 7th of January 1792 Christopher Columbus set sail from Spain under instruction from the King and Queen to find a westerly sea crossing direct to Asia. Of this journey there were several items of literature written to which made account of the journey that still remain today. After reading two different pieces which offer different accounts from different men, a diary written by Las Casas a crewmen on the voyage, which was composed after the expedition, and a letter, to the King and Queen of Spain written by Columbus himself at the time of the voyage. These two items allow for a great insight the initial reactions between the two cultures, and also an insight into the Spanish mind on that fateful day in October 1492. First it must be noticed that there are many strengths and weaknesses to both the items the Letter offers greater credibility, because its a primary source coming directly from Columbus only having been translated from Spanish to English, also the letter was written at the time or shortly after the voyage took place. ...read more.

Another form of communication between the Indians and the Spanish, was the way the Spanish communicated that they meant no harm to the natives at the time of his first landing. This communication was done not using words but by giving the native presents and leaving them relatively 'unmolested' which lead the Indians to a false sense of trust which would inevitably ended badly -"The people gathered around him and appeared astonished. It seemed to him that we were good people and that the man in the canoe must have wronged us or we would not have carried him off". " I shall carry him to Fernandina and restore all his possessions to him so that he may give a good account of us. Then when, god willing, your Highnesses send others here, we shall be favourably received and the natives may give us all that they possess"8. The readings allow us to brief insight into the past and to what values the Spanish held in high regard along with some of their assumptions and world views at the time. It is made quite clear in both the diaries and the letter that the Spanish were devout Christians and believed in all the basic Christian ideals two of these that were made evident in the readings were of Monogamy and Modesty. ...read more.

This would then appease the royals back in Spain and that the time money and utilities afforded to the voyage would not go unrewarded. To lie also benefits Columbus the most because his job would be at stake if the expedition was deemed a failure "Their highnesses can see that I will give them as much gold s they need, if their Highnesses will render my a very slight assistance".14 It is easy to see after reading the two pieces that in 1492 the world and what the Spanish knew of the world changed forever. In having read both the diaries that were written by Columbus documenting his first accounts with the people of the Caribbean and also the letter that he also wrote to the King and Queen of Spain it is not hard to notice that there are many inconsistencies with many white lies being told. This journey what was meant to be a simple voyage to find a westerly sea crossing to the Asian continent turned out to be a massive boost for the Spanish but signalled the beginning of the end for the natives of Mesoamerica. ...read more.