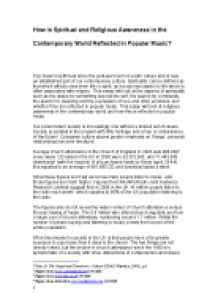 How is Spiritual and Religious Awareness in the Contemporary World Reflected in Popular Music?

﻿How is Spiritual and Religious Awareness in the Contemporary World Reflected in Popular Music? Pop music has thrived since the post-war boom in youth culture and is now an established part of our contemporary culture. Spirituality can be defined as that which affects ones inner life or spirit, an incorporeal aspect to life which is often associated with religion. This essay will look at the aspects of spirituality such as the desire for something beyond the self, the search for community, the search for meaning and the expression of love and other emotions, and whether they are reflected in popular music. This essay will look at religious awareness in the contemporary world and how this is reflected in popular music. Our post-modern society is increasingly one without a shared set of values. Society is isolated in the present with little heritage and a fear or ambivalence of the future[1]. Consumer culture places greater emphasis on ?things?, personal relationships become devalued. Average church attendance in the Church of England in 2005 was 988,000[2] every week. CD sales in the UK in 2005 were 33,375,000, and 11,443,000 downloads[3] (with the majority of all purchases made by those aged 25-44), this equates to an average of 861,885 CD and download sales a week. What these figures don?t tell us is how many people listen to music, and those figures are much higher. Figures from RAJAR (Radio Joint Audience Research Limited) suggest that in 2008 in the UK 45 million people listen to the radio each week[4], which equates to 90% of the UK population listening to the radio. The figures also do not reveal the wider context of church attendance versus the purchasing of music. The 0.9 million who attend church regularly are from a larger pool of church attendees, numbering around 1.7 million. Whilst the number of people buying and listening to music comes from a pool of the entire population. ...read more.

They may feel something ?wholly other[18]? in this experience as separate from reality. This can be seen as displaced transcendence where the pop artist is worshipped. The concert itself can then be seen as religious ritual, with those attending coming out feeling altered, cleansed and uplifted from their experience. Nightclub culture began to take off in the late 1980?s; Dante describes the movement as almost religious in its meaning and fervour among the youth of the time: ?The music was the Genesis, the illegal parties were the gospel, and the drugs were the revelation?[19]. Dante goes on to say that the club culture and the associated drug taking was part of a search for something that was missing in their lives, something more than the everyday, that in the short term drugs and dance music seemed to provide. Dance music and culture is very much concerned with achieving those moments of present-tense ecstasy, through the repetitive beats and ?loved-up? lyrics (and sometimes through drugs, usually Ecstasy). This combination of drugs and music combine to produce an exhilarating trance like state, similar to tribal rituals or religious ceremonies. Some have even argued that the night club ?rave? is a religious ceremony in itself with the mixing desk as altar and DJ as priest[20] (the dance group Faithless even released a song called God is a DJ). The sociologist Durkheim writes about and how a person talking to a crowd (which could equally be applied to a musician or DJ) finds the feelings he is expressing are amplified within the crowd, creating a powerful ?passionate energies?[21]. Durkheim also writes of the idea of ?collective effervescence? where a person within a crowd (which again can be applied to a nightclub or concert) becomes part of the ?other?, something bigger than the individual, and everyone feels ?transfigured?[22]. This effervescence is similar to what occurs in assembled religious life. ...read more.

The Song of Songs in the Old Testament is a love poem, but can equally be seen as a being directed to either another human being or towards God. Similarly, many pop songs contain ideas and expressions of love which could be directed at God. For example the Robbie Williams song ?Let Love Be Your Energy? reads like a well structured prayer complete with adoration for God, confession, praise and thanksgiving. The words of the chorus are: ?If you?re willing to change the world, Let love be your energy, I?ve got more than I need, When your love shines down on me? The concept and reality of Christian love is alive in popular music, the themes of love, salvation and transcendence shining through. Christian and spiritual ideas then can be seen in popular music, and the spiritual questioning and searching of the individual can be seen reflected in the spiritual journey of the popular musician. On a more explicit level this can be seen in the growth of successful Christian rock and pop artists. Bands such as Delirious? are crossing over into the mainstream pop market and culture. Openly Christian bands are becoming more successful, for example the female group Mary Mary (named after Mary, the mother of Jesus, and Mary Magdalene) had a hit in 2000 with a song called Shackles (Praise You), an open song of praise and adoration, with the lyrics; ?Take the shackles off my feet so I can dance, I just wanna praise you?. I once was lost, But now am found, I?ve got my feet on solid ground, Thank you Lord? Like many American pop stars, Mary Mary learnt to sing in church. But unlike those same stars whose music no longer reflects their upbringing, Mary Mary make no apologies for their faith. Joseph calls this a new type of music, which expresses faith, but is not religious, church related music, ?It was the Gospel in music, instead of gospel music?[39]. There are also a number of American rock bands who are openly Christian and this is reflected in their lyrics. ...read more.