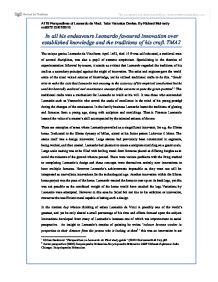 In all his endeavours Leonardo favoured innovation over established knowledge and the traditions of his craft. There are examples of areas where Leonardo prevailed as a magnificent innovator, for e.g. the Sforza horse. Dedicated to the Sforza dynasty of M

In all his endeavours Leonardo favoured innovation over established knowledge and the traditions of his craft. TMA2 The unique genius Leonardo da Vinci born April 1452, died 1519 was self educated, a medieval man of several disciplines, was also a pupil of extreme empiricism. Specializing in the theories of experimentation followed by reason, it stands as evident that Leonardo regarded the traditions of his craft as a secondary principal against the might of innovation. The artist and engineer gave the world some of the most valued sources of knowledge, yet he utilised traditional crafts to do this. "Gould tries to make the case that Leonardo was amazing in the accuracy of his empirical conclusions but he used his basically medieval and renaissance concept of the universe to pose the great question1" The traditional crafts were a mechanism for Leonardo to wield at his will. It was those who surrounded Leonardo such as Verrocchio who sowed the seeds of excellence in the mind of his young prot�g� during the changes of the renaissance. In the family business Leonardo learnt the traditions of glazing and furnaces from a young age, along with sculpture and mouldings. ...read more.

quoted by Serena Quatermaine whence stating such skill requiring "good judgement in composition, inventiveness, and an ability to move the soul" Quatermaine continues "these were such qualities of Leonardo4" Quatermaine is quoting Alberti with parity that Leonardo's achievements in the Arts are both required and valued, above one has read the word inventiveness, which follows suit to innovation. Leonardo da Vinci was recognised as the greatest innovator who ever held a brush. Although fellow artisans and historians mention crafts it is the individual who must innovate to use them, to be remembered. "Leonardo was startling for his time because as well as seeking truth in the bible or in classical writings, he sought it in the observations of nature, and accurate recording of what he saw5"-Museum of Science Boston. This statement is apt as observations were a crucial element in Leonardo da Vinci's career especially since 1503 when Leonardo conceived the possibility of manned flight. Such observation was imperative, when examining birds. Leonardo's innovations to create a flying machine, a man with wings and a glider of course centuries ahead of their time had to use his traditional crafts of mathematics and physics to aid his imagination; he further combined his gatherings in his codex of flight. ...read more.

In answering the question one would suggest that findings from Leonardo's innovations in sight were indeed favoured over traditional crafts. The year c1502 The Galata Bridge is the defining moment of Leonardo's devotion to innovation, the bridge has various innovations including artistic, architectural and ambitious; this was a design wonder which went far beyond the traditional arts and crafts movement of the renaissance. Having never been conceived before this was the first of its size from the Bosporus to connect Constantinople. Had it been constructed it would still be one of the world's longest bridges. Naturally condemned to be a disaster by contemporise the bridge was unfeasible to all those who simply could not conceptualize the idea. Yet it has acted as an inspiration for later generations of architects. Analysts have since concluded that the design of the Galata Bridge has qualities which are found within "large lightweight structures6". It would not have been until the Industrial revolution of the eighteenth and nineteenth centuries when technology, materials and engineers were able to fully understand Leonardo's design needs. Leonardo certainly favoured his innovation it was traditions of the crafts and technology in the early Sixteenth Century which were restraining his great mind when he attempted this feat. ...read more.