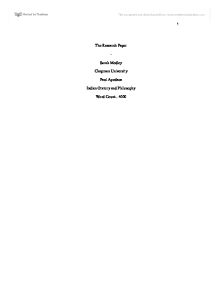 Indian Oratory and Philosophy. Red Jacket, Sagoyewatha, and Otetiani; each are names of the great Seneca chief who is considered one of the greatest orators in Native American history. The components of each speech he gave are more than just words.

The Research Paper - Sarah Medley Chapman University Paul Apodaca Indian Oratory and Philosophy Word Count.. 4000 The Research Paper Red Jacket, Sagoyewatha, and Otetiani; each are names of the great Seneca chief who is considered one of the greatest orators in Native American history. The components of each speech he gave are more than just words. A portion of who he and the changing, outside world around him underlies each line spoken. The entirety is spoken of for a reason, and taken from something: a memory, and idea, a historical event, a prediction of the future, concern, a disagreement, a value, an opinion. In understanding the underlying background and meaning of single separate statements in Red jacket's speeches, his motivation and premises can be discovered. ...read more.

Paul 2010). The chief's popular title is Red jacket. This named arrised from his act of wearing one of Britain's red coats, symboling his support of the English in the American Revolution. The orator's names alone have depth and background. When reviewing the influential events and experiences in his life, it will be evident that these have a large impact on what and why his statements are made during a speech. (Columbia Electronic Encyclopedia 2009) Red Jacket was well known for several characteristics and events. Before our first speech in 1805, which will soon be covered, Red Jacket was working politically. In1786 he urged that hostility against the Europeans continue at the Native American Conference at the mouth of the Detroit River. ...read more.

is one of many rhetorical devices (packaging appeal), hidden agendas (making fun of God), and possibly abused translation. (Cannavo 1998:46-47, Venuti 1992:160) The first few words Red Jacket spoke were packaging, as he appealed to his audience, Cram, by calling him a brother and a friend. Three words into the argument we have already detected rhetorical devices. Red Jacket then uses this poetic metaphor of the sun to describe their meeting. Next the orator appeals to an individual, God. Someone who Red Jacket knows Cram, a missionary, views as highest authority. (Blaisdell 2000:41) He says it is God's doing that they meet on that fine day. Interpretation is an important factor of explaining the speech presented. Rhetoric , accuracy of the message, hidden agendas, and assumed semantics should be examined to determine the various possible messages derived from the text. ...read more.