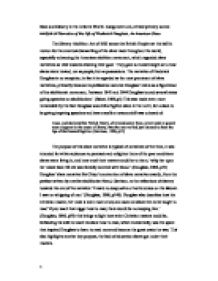 Race and Slavery in the Atlantic World: Assignment one, critical primary source analysis of Narrative of the Life of Frederick Douglass, An American Slave.

Race and Slavery in the Atlantic World: Assignment one, critical primary source analysis of Narrative of the Life of Frederick Douglass, An American Slave. The Slavery Abolition Act of 1833 across the British Empire set the ball in motion for the eventual dismantling of the slave trade throughout the world, especially enhancing the American abolition movement, which regarded slave narratives as vital towards attaining their goal. They gave a crucial insight as to how slaves were treated, not as people, but as possessions. The narrative of Frederick Douglass is no exception; in fact it is regarded as the most prominent of slave narratives, primarily because its publication secured Douglass' status as a figurehead of the abolitionist movement, 'between 1841 and 1844 Douglass toured several states giving speeches on abolitionism.' (Baker, 1986,p1) This was made even more remarkable by the fact Douglass was still a fugitive slave in the north, for a slave to be giving inspiring speeches and have excellent oratory skill was unheard of: I rose, and declared that Patrick Henry, of revolutionary fame, never made a speech more eloquent in the cause of liberty, than the one we had just listened to from the lips of that hunted fugitive. ...read more.

This also highlights another key purpose, the lack of education slaves got under their masters. The content of the narrative describes Douglass' life as a slave in vivid detail, in the first few chapters he describes how he grew up without a mother 'My mother and I were separated at a young age.' (Douglass, 1986, p48) It is also within these chapters that he describes the first time he witnessed the sheer brutality their masters could bestow on the slaves. Between chapters five and seven are the chapters where the abolitionist seeds are first planted, all spurring from the aforementioned quote where he is prevented from learning to read. This inspires him, not only to read, but how to break away from slavery from that moment, I understood the pathway from slavery to freedom.' (Douglass, 1986, p78) Douglass eventually returned to Mr Auld as a slave, and later on in the narrative he goes into more detail of how cruel this man could actually be, he describes how much food four slaves were given to eat, 'we were allowed less than half of a bushel of corn-meal per week, and very little else' (Douglass, 1986, p96). ...read more.

It is difficult to find any traces of archaic language other than expected topical words such as 'n***o-breaker' (Douglass, 1986, p117), the other examples are that of imperial measures such as 'half-bushel' (Douglass, 1986, p108). The ability to convey his thought and feeling combined with descriptive, non-archaic vocabulary make the narrative easy to understand and to engross the reader, even over a century later. It is difficult to criticise the narrative, it is easy to understand, follow, and gives a clear insight as to how slaves were treated and how they lived. It was also the first narrative to be published by the Anti-Slavery office in 1845, which gives a clear indicator as to how important Douglass' work actually was, and still is to historians. It is due to work like this, which set the trend for slave narratives, and lead to historians such as Olney and Taylor even setting conventions for which slave narratives are written. Douglass' narrative stands out from others as he is not hindered by his low levels of vocabulary, this coupled with the time it was published is what has made it such a success, by 1860 thirty-thousand copies had been sold while slavery was still rife showing how important the text was, and is. ...read more.