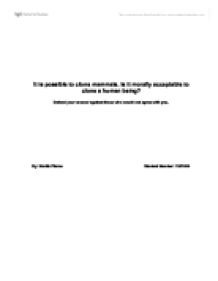 It is possible to clone mammals. Is it morally acceptable to clone a human being? Defend your answer against those who would not agree with you.

It is possible to clone mammals. Is it morally acceptable to clone a human being? Defend your answer against those who would not agree with you. By: Martin Pierce Student Number: 1057404 In cloning for medical-research purposes the development of the embryo is halted as soon as a cluster of stem cells develops. The stem cells are then harvested for research purposes. Due to the fact that no infant is born (in fact the embryo never even gets past the blastocyst stage), it is argued that this type of cloning has nothing to do with human cloning. (Hatch Backs Limited Cloning, 2002). For this reason this paper shall take the statement "to clone a human being" as meaning cloning that results in a fully formed human and not on the cloning of embryos for the purposes of research. The issues around cloning are in the main more ethical than theological and yet most of the objections to cloning come from religious sources, even if those objections are not religious in nature. The first objection is that cloning leaves God out of the process of human creation. This only makes sense though if your definition of God is of a being that plays a role in the birth of each member of our species. Even holding to this view it does not necessarily follow that cloning is comparable to playing God (Brannigan, 2001). ...read more.

at least some humans as a commodity to be bought and sold, as a means to an end rather than as an end in themselves (Kass & Wilson, 1998). Perhaps we can go a long way towards preventing this abuse of cloning by regulations limiting the reasons for its use and who it can be used for. If cloning were to be allowed only for those whose desire is to have a child for its own sake would that type of parental constraint not go a long way towards preventing the cloning of humans as organ banks (Kass & Wilson). At the moment clones still have to be born they cannot be created and brought to term in a laboratory. If a child is born to a parent or parents immaterial of how that child was actually conceived have we not seen from studies of adoption, surrogacy and in vitro fertilisation that the parent or parents of these children become as deeply attached to their children as any others? It is possible that this could become a problem in the future. If science finds a way to clone human beings completely in a laboratory then getting a clone from a lab could become like getting a pet from the pet store. Without a birth would people's attitude towards the cloned infant as a human being with the same rights and privileges as everyone else be diminished (Kass & Wilson, 1998). ...read more.

In answer to the question, Is it morally acceptable to clone a human being? The answer would appear to be yes, it is morally acceptable. Cloning as a process causes no harm physically, spiritually or morally to the individual clone, other people and society or to the species as a whole. What is not morally acceptable are some of the uses cloning technology can be put too or the human rights violations that could be committed against clones. The central question facing those who approach cloning with an open mind then becomes how do we prevent these violations from occurring? Provided rules and regulations are put into place regarding the reasons for cloning and how the cloned are to be treated it is arguable that the gains from cloning will exceed the risks. The question then becomes what those rules and regulations should be, who should decide and who should enforce them. Arthur Caplan the director of the University of Pennsylvania's Centre for Biomedical Ethics gives four preliminary human cloning guidelines: "One, make sure cloning is competently done. It requires tremendous skill. We must avoid deformity and death. Two, insist on follow-ups so the clone's physical and mental health can be studied. Three, insist that cloning is done in privacy - there is nothing worse than becoming an international oddity. And four, screen those who want it done. Having money isn't a good enough reason to be cloned - if it were we would sell babies" (Gribbin, 1998, p. 1). ...read more.