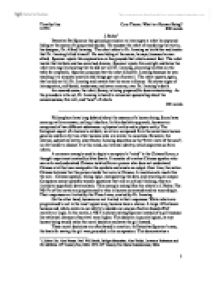 What is the Self? Philosophers have long debated about the essence of a human being. Some have come up with an answer, calling it dualism. In this dualistic approach, humans are comprised of two different substances: a physical entity and a physic entity.

I, Robot1 Detective Del Spooner has gained permission to interrogate a robot he captured hiding at the scene of a purported suicide. He accuses the robot of murdering the victim, his designer, Dr. Alfred Lanning. The robot refers to Dr. Lanning as his father and insists that Dr. Lanning killed himself. He was hiding at the scene, he says, because he was afraid. Spooner rejects this explanation on the grounds that robots cannot feel. The robot insists that he feels and has even had dreams. Spooner rejects this outright and bates the robot into angrily shouting that he did not kill Dr. Lanning, slamming his fists on the table for emphasis. Spooner proposes that the robot killed Dr. Lanning because he was teaching it to simulate emotion and things got out of control. The robot repeats, again, that he did not kill Dr. Lanning and reveals that his name is Sonny. He shows signs of introspection, self-doubt, tenderness, and even remorse, over Dr. ...read more.

Their responses are limited by the Three Laws, created by Dr. Lanning. On the other hand, humans are not limited in their responses. While robots are programmed to act in the most logical way, humans have a choice. A large rift between humans and robots exists in our ability to decide our course of action based off of morality or logic. In the movie, a NS-5 is shown saving Spooner instead of a girl because his statistical chances of survival were higher. This decision is purely logical, as any human being would make the moral decision and save the girl instead. These moral decisions are often based in emotion. In Detective Spooner's case, the basis for saving the girl was grounded in his compassion. This demonstrates a fundamental difference between humans and robots. Robots are nothing more than "lights and clockwork"1; humans are more sophisticated than that. In the end of the movie, Sonny, against what seems the logical choice, makes the humane and moral choice of saving Dr. ...read more.

In essence, robots will understand what love is biologically, but will never be able to express love themselves. This limitation is exemplified in IBM's supercomputer, deemed Watson. When its creator, David Ferrucci, was asked if Watson could understand a joke, he states "We programmed it to recognize what humans would consider puns... But does the computer appreciate the humor? No, it doesn't."3 No matter how far technology advances, robots cannot clone a human's subjective response to emotions. Personhood is a difficult concept that philosophers struggle with. We willingly give personhood to others who appear to have the same biological genome as we do. We even anthropomorphize animals, giving them the same benefit of the doubt. However, when we encounter super-intelligent pieces of machinery, we come to question the characteristics of personhood. After observing humans and the characteristics of personhood ourselves, we are able to come up with certain requirements that must be met in order to be deemed a person. With such limitations, we will be able to draw a clear line between humans and robots, no matter how technologically advanced they become. ...read more.