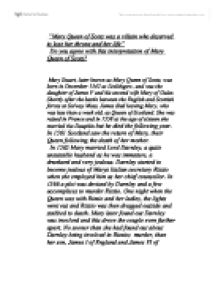 "Mary Queen of Scots was a villain who deserved to lose her throne and her life" Do you agree with this interpretation of Mary Queen of Scots? Mary Stuart, later known as Mary Queen of Scots, was born in December 1542 at Linlithgow, and was the daughter of James V and his second wife Mary of Guise. Shortly after the battle between the English and Scottish forces at Solway Moss, James died leaving Mary, who was less than a week old, as Queen of Scotland. She was raised in France and in 1558 at the age of sixteen she married the Dauphin but he died the following year. In 1561 Scotland saw the return of Mary, their Queen following the death of her mother. In 1565 Mary married Lord Darnley, a quite unsuitable husband as he was immature, a drunkard and very jealous. Darnley started to become jealous of Marys Italian secretary Rizzio when she employed him as her chief counsellor. In 1566 a plot was devised by Darnley and a few accomplices to murder Rizzio. ...read more.

Virtually straight after Darnley's death, Bothwell kidnapped Mary and forced her to marry him(!). When they had officially married the people of Scotland were furious and it made Mary look like a scoundrel and a cheat. I think this was another part of Mary's master plan, so I don't think Bothwell forced her to marry him but, they staged the whole thing and Mary really did want to marry him. The Scots rebelled against Mary and forced her to abdicate her throne and make way for James. The Scots then imprisoned Mary, but she broke free, with the help of Bothwell, and fled to England to seek the help of her cousin Elizabeth I. When Mary arrived in England she was imprisoned, but she wasn't put in a rotten, stinky, slimy, rat infested cell, far from it, she was put in a tower with all her maids and treated like a high class person. I think Mary did and didn't deserve to be treated like that. She was of Royal blood, but on the other hand she was a suspect in the murder of her former husband Lord Darnley. ...read more.

leaving her to be brought up in France by her maids and nurses - at the tender age of sixteen she married and lost her husband The Dauphin, Francis II - she found out her ex - husband, Lord Darnley had been involved in the murder of her secretary Rizzio and her husband Bothwell was the leading suspect in Darnley's murder. I think Mary deserved to lose her throne but definitely not her life. She deserved to lose her throne because she wasn't a good Queen, she didn't really care what the Scottish people thought, she married a murderer and she may have been a murderess! She didn't deserve to lose her life because of this or that she was tricked into signing the paper saying she would go through with Elizabeth's assassination. Other people may have a different opinion because of the fact she was a possible murderess due to the religious law concerning divorce in Catholic marriages and she intended that the assassination of her cousin Elizabeth would occur. Elizabeth's actions in taking over a week to sign her cousin's death warrant echoed the uncertainties surrounding Mary. ...read more.