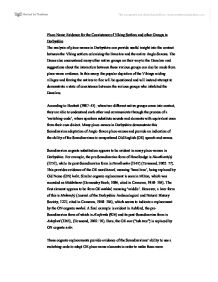 Place-Name Evidence for the Coexistence of Viking Settlers and other Groups in Derbyshire The analysis of place-names in Derbyshire can provide useful insight into the contact between the Viking settlers colonising the Danelaw and the native Anglo-Saxons. The Danes also encountered many other native groups on their way to the Danelaw and suggestions about the interaction between these various groups can also be made from place-name evidence. In this essay, the popular depiction of the Vikings raiding villages and forcing the natives to flee will be questioned and will instead attempt to demonstrate a state of coexistence between the various groups who inhabited the Danelaw. According to Hockett (1987: 43), when two different native groups come into contact, they are able to understand each other and communicate through the process of a 'switching-code', where speakers substitute sounds and elements with equivalent ones from their own dialect. Many place-names in Derbyshire demonstrate this Scandinavian adaptation of Anglo-Saxon place-names and provide an indication of the ability of the Scandinavians to comprehend Old English (OE) speech and names. Scandinavian cognate substitution appears to be evident in many place-names in Derbyshire. For example, the pre-Scandinavian form of Hazelbadge is Haselbech(e) (1251), while its post-Scandinavian form is Heselbache (1367) (Townend, 2002: 77). This provides evidence of the OE word h�sel, meaning 'hazel tree', being replaced by Old Norse (ON) helsi. Similar cognate replacement is seen in Milton, which was recorded as Middeltune (Domesday Book, 1086, cited in Cameron, 1958: 104). The first element appears to be from OE middel, meaning 'middle'. ...read more.

These examples of phonemic correspondences suggest that the Scandinavians avoided changing the semantic content of Anglo-Saxon place-names and instead resorted to less drastic methods of change that would enhance their understanding and pronunciation of them. This provides further evidence of the degree of intelligibility between the two groups as the Scandinavians seemed to analyse the original Anglo-Saxon names in terms of their semantics and phonology in order to come up with corresponding forms that Norse speakers could understand. This is supported by Milliken and Milliken (1988: 1), cited in Townend (2002: 45), who suggest that 'the degree of intelligibility between any two dialects correlates with the system of phonological correspondences that exists between cognate lexical items in those dialects'. However, this sensitivity to Anglo-Saxon place-names by the Scandinavians is only true to a limited extent, as illustrated by Grimston hybrids, where a Scandinavian personal name is followed by the generic OE element tun, meaning 'settlement'. These places represent early English villages, as evidenced from the fact that in Derbyshire, the majority of them are situated on high-quality agricultural land, 'north of the River Trent and to the west of the River Derwent' (Cameron, 1958: 92). The idealness of this area for settlement and cultivation suggests that it was likely to have been inhabited first. This is supported by Fellows-Jensen (1978: 368), who suggests that the 'the majority of the hybrid and scandinavianised names are borne by English vills whose names were partly altered by the invading Scandinavians.' Thus, the name of the new Scandinavian owner replaced the original Anglo-Saxon name in the initial element of a place-name. ...read more.

The elements in the OE form are neither cognate nor phonetically similar to the modern Scandinavianised form. This would suggest that in certain areas of Derbyshire, there was in fact little contact and intelligibility between the English and Scandinavians. However, this might have been because Derby held a major military base for the Danish army, so to assert its significance, the Danes changed its name to make it wholly Scandinavian. This OE form of Derby contradicts Fellows-Jensen (1972: 119), who suggests that 'Where a cognate OE word exists... it is reasonable to assume that it was this word the Scandinavian element replaced and not some entirely unrelated word'. Thus, although the phenomenon of changing place-names with elements unrelated to its original form is rare, it is certainly apparent, and might indeed have been more common in Derbyshire if more pre-Conquest forms of place-names were available. However, due to the scarcity of pre-Conquest documents in the North, the majority of names survive only in their Scandinavianised forms (Townend, 2002: 53). Place-name evidence has been significant in providing information about the interaction between the various native groups that settled in Derbyshire. It would seem plausible with the possible exceptions of Grimston hybrid names and Derby, that the Danes generally did not attempt to completely alter the semantics of English place-names but merely made them more congruent with their own forms of speech, using corresponding phonemes and cognates. A peaceful coexistence is generally demonstrated between the Danes and Anglo-Saxons, as well as the other groups encountered by the Danes, such as Irishmen, Norwegians and travelers from the north-west of England, who accompanied them to the Danelaw. ...read more.