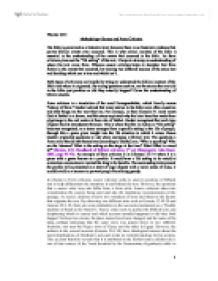 Source and Form Criticism of the Bible. Both types of criticisms are helpful by trying to understand the biblical content of the Bible and where it originated. By raising questions such as, are the stories that are told in the bible just parables or did

Words: 2431 Methodology: Source and Form Criticism The bible is perceived as a historical text; however there is no historical evidence that proves biblical events ever occurred. This is why critical analysis of the bible is essential in the understanding of the events that occurred in the bible. As form criticism plans out the "life setting" of the text, it helps to develop an understanding of where the text came from. Whereas source criticism helps to decipher fact from fiction in the events that occurred, by viewing two different sources of the same text and deciding which one is true and which isn't. Both types of criticisms are helpful by trying to understand the biblical content of the Bible and where it originated. By raising questions such as, are the stories that are told in the bible just parables or did they actually happen? Come the understanding of biblical studies. Form criticism is a translation of the word Formgeschichte, which literally means "history of form." Gunkel noticed that many stories in the bible were often causation and why things are the way they are. For example, in there Genesis 35 Jacob meets God at Bethel in a dream, and this story explained why the later Israelites made there pilgrimage to the cult centre at there site of Bethel. Gunkel recognised that each type of genre had its introductory formula. This is where the Sitz im Leben or "life setting" becomes recognised, as a scene emerges from a specific setting in the life of people, through this a genre gives insight into the life situation in which it arises. ...read more.

and develops an understanding of the audience in which the text was intended. In Deuteronomy 6: 4-9 there are two different types of sources for the readings of the Shema. The contrast between the NRSV (New Revised Standard Version) and NJPS (New Jewish Publication Society) where verse 6:6-7 differ from each other. The point of source criticism is to analyse the readings to determine which of the two sources being used in the text is the most eligible of being the original translation. The NRSV bible reads "keeps these words that I am commanding you today in your heart. Recite them to your children." Whereas the NJPS bible reads, "Take to heart these instructions which I charge you this day. Impress them upon your children." As these texts differ from each other they have a similar meaning although the author in the NJPS version sounds a lot more forceful, using words such as "charge" and "impress," also the use of the word "instructions" is more of a description showing how something is to be done, whereas as a "commandment" is more of a doctrine that is taught. By instigation further research, the NRSV is similar to the JPS Old Testament, KJV with strong's numbers, Hebrew names version and the Third Millennium Bible. This analysis therefore makes the NRSV a more reliable resource then the NJPS version. (Website: Instaverse, the bible at your fingertips. Study light. Copyright (c) 2001-2009, StudyLight.orghttp://www.studylight.org/desk/?l=en&query=Deuteronomy+6%3A4+-+9&section=0&translation=jps&oq=De%25206%3A4-9&new=1&nb=de&ng=6&ncc=6) In Deuteronomy 6:4-9, form criticism is very helpful in establishing the origination of the text; the Shema is an affirmation of Judaism and a declaration of faith in one God. ...read more.

Therefore source criticism and form criticism are crucial in the formation of the Bible in determining the authors' perspective and the aspects in which those perspectives were derived. Hence both types of criticisms compliment one another in the analysis of the bible whilst trying to decide where a source was formed and why such sources were used. Form and Source Criticism Similarities: Differences: � Both texts look at aspects that surround the text, hence the location of the text, which is important in the understanding of the text. (Why it has been placed where it was placed?) � They can assist one another in the aspect that they both look at social values at the present time in which the text was written. (Influences in/behind the text and the intended audiences). � Form criticism and source criticism seeks to answer questions of biblical text to help differentiate the situations in and behind the text. � Both types of criticisms are helpful by trying to understand the biblical content of the Bible and where it originated. (compliment each other). � From criticism reviews the "life setting" of the text and the surrounding element of the text. Whereas source criticism makes a judgement on whether the text is true. � Source criticism takes into account the sources being used and observes the repetitions/inconsistencies of the passage. Whereas form critics will examine the literary devices being used. � The questions that a source critic may ask differ from a form critic. � Source criticism views where the author got the sources and the intention of the sources being involved in the text. Whereas form criticism comprehends the surrounding elements of a text (Life setting) and develops an understanding of the audience in which the text was intended. ...read more.