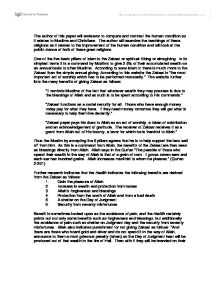 The author of this paper will endeavor to compare and contrast the human condition as it relates to Muslims and Christians. The author will examine the teachings of these religions as it relates to the improvement of the human condition and will look at the public stance of both of these great religions. One of the five basic pillars of Islam is the Zakaat or spiritual tithing or almsgiving. In its simplest terms it is a command by Muslims to give 2.5% of their accumulated wealth on an annual basis to other Muslims. According to www.islam.tc there is much more to the Zakaat than the simple annual giving. According to this website the Zakaat is "the most important act of worship which has to be performed monetarily." The website further lists the many benefits of giving Zakaat as follows: "It reminds Muslims of the fact that whatever wealth they may possess is due to the blessings of Allah and as such is to be spent according to His commands." ...read more.

on the Day of Judgment heat will be produced out of that wealth in the fire of h**l. Then with it they will be branded on their forehead and their flanks and backs. (It will be said to them) This is the treasure which you hoarded for yourselves, taste then the treasure that you have been hoarding." (Qur'an 9:34-35) Christians on the other hand are certainly not as public and seem to be by the author's experience somewhat bashful or ashamed to speak about money, tithing and almsgiving. From the author's own experience as a member of the Stewardship committee of his Church, we only speak of money three Sundays per year and only in the context that it is a member of the trilogy of time, talents, and treasures to be given for the glory of God. Further, Christians are of two minds as to the amount of money they should give. The old testament of the Bible in Leviticus 27:31 states the following: A tithe of everything from the land, whether grain from the soil or fruit from the trees, belongs to the Lord; it is holy to the Lord. ...read more.

Since there has been no outward vocal opposition to this generosity by Muslims it must therefore be an accepted practice. The author cannot recall or through research find any Christian terrorist let alone one who is exalted because of his giving. Both great religions certainly promote giving. The Muslim Zakaat clearly supports other Muslims which may just be the single biggest reason for the explosive growth of the Islam faithful in the world. Muslims believe the Zakaat should support all things Muslim such as education and cite Muhammad's exhortations regarding education as follows: "If you educate a man, you educate an individual. If you educate a woman, you educate a nation." Certainly the Zakaat helps support education amongst the Muslims which further adds to their burgeoning populations. Christianity on the other hand is more quiet and somewhat bashful in their attempts at Christian education amongst the world's non-Christian people which may account for the slower growth of Christianity. Certainly both religions are painfully aware of the decline in the overall human condition, but Muslims, because of their adherence to the Five Pillars are doing a better and more public job of showing humankind (not necessarily in the United States) the kind, peace-loving, nurturing side of their faith. ...read more.