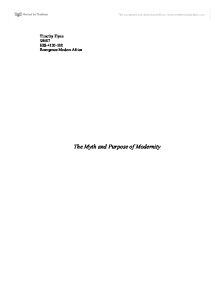 The Myth and Purpose of Modernity

Timothy Flynn 5/8/07 HIS-4120-100 Emergence Modern Africa The Myth and Purpose of Modernity Writer E.L. Doctorow once stated that, "History is the present. That's why every generation writes it anew. But what most people think of as history is its end product, myth." Doctorow may be a writer of historical fiction, but this fact makes his words no less useful when engaging concepts about Africa's colonial past. In particular, the concept of modernity and its role in accounts of colonial Africa is a complex and multifaceted construction, which cannot be truly comprehended without a critical examination of its subtextual meaning and purpose. The prevailing view of modernity in relation to colonial Africa is that it was the paramount state of civil existence - political, social and economic - to which the inhabitants of that continent had yet to ascend to. European colonial powers saw themselves as inherently superior to their African counterparts, and under the guise bringing civilization to the continent, exploited the continent for its own profit-oriented and political ends. However, sympathetic this account may be to Africans, it is undoubtedly Eurocentric, oversimplified and only part true; in short it is an illusion. If modernity was to be defined by the perceived paragon of European statecraft and expansionary practices, then with its various empires Africa was indeed modern before Europe. As will be explained, the structure and strength of many African institutions - specifically those involved in political power sharing relationships - prevented such a simple takeover as depicted above from ever occurring. ...read more.

As a result, Europe employed the conceptual machinery of modernity to reinvent an African reality that was better suited to colonial ambitions. Evidence of such thinking is highlighted in excerpts from an 1812 memorandum by London's African Committee regarding the viability of enforcing the ban on African slave trading. The memo states that "one of the chief arguments urged for the abolition of that trade was that on adoption of that measure, a new, more desirable, and more extensive commerce would...be established in Africa" (176). It notes further, however, that "British trade will not be able to exist where the slave trade is carried on," and then proceeds to yield a rather informative critique: Can the wildest theorist expect that a mere act of the British Legislature should...inspire with wisdom and refinement the unenlightened natives of the vast natives of Africa and persuade them that it is for their interest to contribute to...the destruction of a trade non inconsistent with their prejudices, their laws, or their notions of morality and religion... (176) Though it may not be intentional, there is an implicit call in this statement to redefine, to modernize those prejudices, laws and notions of morality and religion so that they may be in line with the colonial venture. Once Europeans realized the potential resource and market values of the African space, having the extent of their presence determined by the indigenous people was no longer perceived as an acceptable state of affairs. As a result, European nations took on the colossal task of modernization through molding a fervent colonial mindset - both in Africa and at home - in order to destabilize the African powers which threatened their economic aims. ...read more.

The purpose of all these actions, of course, was to secure the smooth growth of empire in Africa, "... [creating] a clearly defined hierarchical society in which Europeans commanded and Africans accepted commands..." (Ranger 220). One must be careful, however, in taking these accounts at face value. Given the earlier evidence of proud, capable and independent African rulers, it would be out right foolish to assume that Africans as a whole submitted so easily to this process of modernization. In fact, "[m]ost of the revolts were led...by the traditional rulers" (63). Even early on, Africans were well aware of the "iniquities, inhumanity, and exploitation of the colonial system," and engaged in an array of both traditional and creative forms of resistance. Outright insurrection and rebellion were the most common forms of confronting the colonial order, but there were also instances of escape, passive resistance, reform movements, formations of political groups and criticism through the arts and media. On the whole, it should be apparent that when approaching accounts of European colonialism in African history, the concept and meaning of modernity becomes key to framing a more accurate narrative of the past. The need for Africans to be led into the modern era was an invention. African civility was on par with, if not surpassing sophisticated notions of statecraft based on European standards. The need to modernize rested not in African savagery, but in the European desire to expand its Empires take control of the rich African space. Territorial sovereignty was the main issue here and as result, modernization had the paradoxical, though intended effect of granting it to those who didn't deserve and revoking it from those who did. ...read more.