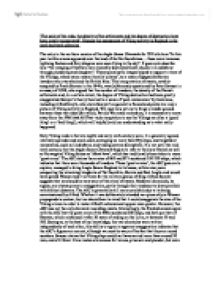 The scale of the raids, the density of the settlements and the degree of destruction have been greatly exaggerated'. Discuss this assessment of Viking activity in England in the ninth and tenth centuries

'The scale of the raids, the density of the settlements and the degree of destruction have been greatly exaggerated'. Discuss this assessment of Viking activity in England in the ninth and tenth centuries. The entry in the northern version of the Anglo-Saxon Chronicle for 793 tells how "In this year terrible omens appeared over the land of the Northumbrians...: these were immense lightning flashes and fiery dragons were seen flying in the sky". It goes onto describe how "the ravaging of heathen men miserably destroyed God's church in Lindisfarne through plundering and slaughter". These apocalyptic images helped to support a view of the Vikings, whose name means literally 'pirates', as a mass of (pagan) barbarian invaders who overwhelmed the British Isles. This interpretation of events, notably accepted by Frank Stenton in the 1940s, was (in)famously questioned by Peter Sawyer in an essay of 1958, who argued that the number of invaders, the density of the Danish settlements and, to a certain extent, the degree of Viking destruction had been greatly exaggerated. Sawyer's theory then led to a wave of 'post-revisionism' by historians, including Alfred Smyth, who claim Sawyer's argument is flawed and paints too rosy a picture of Viking activity in England. We must now set out to forge a middle ground between these two sides (for which, Patrick Wormald reminds us, it is necessary to move away from the 1066 And All That -style temptation to see the Vikings as either a 'good thing' or a 'bad thing'), which will helpfully aid our understanding as to what really happened. ...read more.

So can we draw any firm conclusions based on toponymic evidence? Patrick Wormald suggests that the place-names ending in -ton but with a Scandinavian prefix indicate that the first Viking settlers took over the best land (which would have already been settled by the English). The absence of English elements in the 2nd class of names (those ending in -thorp and -by) may show that Viking settlement was either sufficiently dense to obliterate the evidence of previous inhabitants or that it was on unoccupied land. This, he says, builds up a picture of a significant influx of Vikings. Wormald claims that there is no evidence for a difference between the 1st and 2nd class of names which sheds doubt on the idea recently suggested by Sawyer of a second wave of invader-settler colonisation. However, nor is there any real evidence that the names were formed at the same time. After all, we are heavily reliant on the Domesday Book of two-hundred years later. Nevertheless, the fact remains that there are a great many Scandinavian place-names in the area under the Danelaw. One could argue that whether these names were formed in the 9th, 10th or 11th Centuries is not so much an issue as the fact that they were formed at all. What is inescapable with regard to this is that, somehow, the Vikings managed to have a considerable impact on the English language. Gillian Fellows-Jensen perceives a major flaw in the Sawyer perception of England being invaded by a few aristocratic Danes is the 'vast number' of loan words that replaced 'perfectly adequate' English words for familiar objects and concepts (that is, not simply administrative terms). ...read more.

They managed an administration under the Danelaw, replaced the debased copper currency of Northumbria with a silver one, established towns, for example Dublin and maybe Norwich and gave old ones, such as York and London, a lease of life. Certainly, this boost to urbanisation and trade was inextricably linked with violence, raiding and the slave-trade (as Wormald points out), but it still had a positive effect in boosting development in the longer term. Also, without the Vikings, it might have taken a lot longer for England to become unified, but that is another matter. Nils Lund claimed it was misleading to arrange numbers, influence and permanent effects co-ordinately, the latter two being the premises, the first the conclusion drawn from these. Again and again we come back to the same question of whether it is possible for a small group of invaders to effect large-scale change (and, in relation to the Vikings, destruction). As we have seen, the Vikings had a massive and permanent impact on English society, partly positive, partly negative, but always significant. Hopefully it has been established that it is not necessary for there to have been thousands of invaders for this change to happen, at least in the first place. We need to remember to see the Viking period as fragmented: the early period being a great deal more destructive; the later period more constructive, however unless significant archaeological evidence comes to light, we cannot draw firm conclusions on the scale of the Viking raids or the density of settlement, or the timescale involved. ...read more.