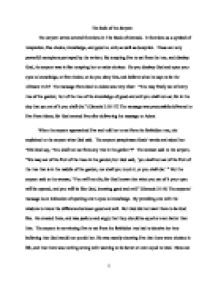 The serpent serves several functions in The Book of Genesis. It functions as a symbol of temptation, free choice, knowledge, and good vs. evil, as well as deception.

The Role of the Serpent The serpent serves several functions in The Book of Genesis. It functions as a symbol of temptation, free choice, knowledge, and good vs. evil, as well as deception. These are very powerful metaphors portrayed by the writers. By tempting Eve to eat from the tree, and disobey God, the serpent was in fact tempting her to make choices: Do you disobey God and open your eyes to knowledge, or free choice, or do you obey him, and believe what he says to be the ultimate truth? The message from God to Adam was very clear: "You may freely eat of every tree of the garden; but of the tree of the knowledge of good and evil you shall not eat, for in the day that you eat of it you shall die." (Genesis 2:16-17) The message was presumably delivered to Eve from Adam, for God created Eve after delivering the message to Adam. When the serpent approached Eve and told her to eat from the forbidden tree, she explained to the serpent what God said. ...read more.

Eve said, "The serpent tricked me, and I ate." (Genesis 3:14) God did not want Adam or Eve to even have the ability to think on his or her own. Why would he have said to Adam: "Who told you that you were naked?"(Genesis 3:14) It is clear that God wanted control of not only the actions of his creations, but also their thought process. God does not immediately punish Adam and Eve for disobeying his command to not eat the forbidden fruit, but instead punishes the serpent first, as evident in the following passage: "Because you have done this, cursed are you among all animals and among all wild creatures; upon your belly you shall go, and dust you shall eat?all the days of your life". (Genesis 3:15) Since the recommendation by the serpent was so clearly in conflict with God's word, the decision boiled down to whom Eve trusted, and whether or not she was tempted to think on her own, and make her own decision. Does she trust God, who created her, or the serpent that she did not know at all She could have protected herself by thinking who was most trustworthy or simply focus on God's command. ...read more.

The most important, and most obvious to me is the ability of the serpent to show Eve how to think about choices in life, when to obey, when to disobey, and having the freedom to pursue knowledge, opening her eyes to all that is available to her regardless of the consequences. Eve's ability to persuade Adam to eat from the same tree and disobey God may have shown not only his loyalty to her, but also his fear of losing her if he did not pursue the same desires. Throughout the book of Genesis we have gained a lot of insight into how the serpent works tempting humans, introducing choices, and free thought, as well as the pursuit of knowledge. We are tempted to do many things, most of the time we do the good things, but then again, there are some people who are tempted to do evil. We sometimes have to make sacrifices in order to achieve what we believe is the right thing to do, sometimes the sacrifice we make means having to disobey rules and laws, and accept the consequences; but many times we also learn from our mistakes, so there is always something good and something bad to be gained from temptation and the pursuit of knowledge. ...read more.