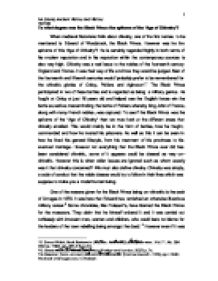 To what degree was the Black Prince the epitome of the Age of Chivalry?

To what degree was the Black Prince the epitome of the 'Age of Chivalry'? When medieval historians think about chivalry, one of the first names to be mentioned is Edward of Woodstock, the Black Prince. However was he the epitome of this 'Age of Chivalry'? He is certainly regarded highly in both terms of his modern reputation and in his reputation within the contemporary sources is also very high. Chivalry was a real issue to the nobles of the fourteenth century England and France. It was their way of life and how they would be judged. Men of the fourteenth and fifteenth centuries would 'probably prefer to be remembered for the chivalric glories of Cr�cy, Poitiers and Agincourt'.1 The Black Prince participated in two of these battles and is regarded as being a military genius. He fought at Cr�cy at just 16 years old and helped see the English forces win the battle as well as masterminding the battle of Poitiers whereby king John of France, along with many French nobles, was captured. To see if the Black Prince was the epitome of the 'Age of Chivalry' then we must look at the different areas that chivalry entailed. This would mainly be in the form of battles, how he fought, commanded and how he treated his prisoners. As well as this it can be seen in how he lived his general lifestyle, from his treatment of his provinces to his eventual marriage. ...read more.

Firstly there was King John, who was treated very well according to Froissart in his chronicle. The Black Prince served the French king 'as humbly as he could' and refused to dine with him at the King's table as the Black Prince said he was 'sufficient to sit at the table with so great a prince as the king was'12. This act the French acknowledged was very noble and chivalrous, with Froissart suggesting that they thought if God allowed the Black Prince the life to, then he would be destined to be a very noble man.13 The French king was sold to Edward III, along with several of the other Poitiers prisoners before being offered their ransoms. This treatment of the king would define the Black Prince for his treatment of prisoners. However it could be questioned as to whether it should. Another prisoner, of the Poitiers campaign, it has been suggested was given very differing treatment to that of the king; the French war captain Bertrand du Guesclin was a man that the Black Prince was reluctant to let go.14 At first it seems that Edward held him at Bordeaux for several months 'without offering him terms of his release'. Once that he was told this was un-chivalric, he released Bertrand and offered him 10,000 florins as long as Bertrand swore not to arm himself against the Black Prince, his family or Don Pedro in Spain. ...read more.

He was an excellent leader in battle, leading the troops from the front and showing them how the battle should be fought. He unlike his predecessors married for love rather than for any political gain, a very chivalric ideal. Despite the open question on if a knight should restrain his men in warfare with the Black Prince failing to prevent churches being burnt down in 1355,for example Seisson, the Black Prince was stern with his men.29 In 1346 for example, a score of his men were hanged when the Messien church near Beauvais was burnt down, as well as when Carentan suffered the same fate.30 The Black Prince and his father were both keen tournament enthusiasts, which would be an expected chivalric activity and one in which one could show their true warlike chivalric nature. As a founding member of the Order of the Garter, he proved to be one of the top 26 chivalric knights in the kingdom. He treated his prisoners well as shown by his treatment to King John in the aftermath of the battle of Poitiers. Even Bertrand du Guesclin it could be argued was treated well, with the Black Prince remitting half of his ransom. Limoges which is the one blemish on his military career came at a time when he was ill. He also had other problems after his N�jera campaign with Aquitaine revolting due to the raise in taxes, which as lord he had a right to do. Overall the Black Prince defined chivalry for his age, setting a high example and was by definition the epitome of the 'Age of Chivalry'. ...read more.