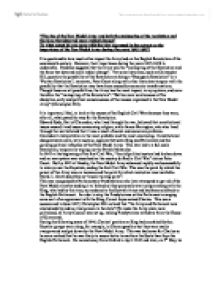 To what extent do you agree with the view expressed in the extract on the importance of the New Model Army during the years 1645-1649?

Even if they did, a compromise probably would have never been reached, as both wanted only what would benefit themselves. The King had become militarily weak and had disregarded of Parliaments rights and liberties yet he still had his legitimacy. Parliament disrespected his legitimacy and did their up most to overthrow the monarchy. The Army could be seen as a mere sector that happened to side with Parliament and then won them the Civil War by breaking stalemate, therefore gaining the label as the "mainspring of the Revolution". The "mainspring" could be the decline in the relationship between King and Parliament yet without the help of the Army, stalemate would have probably resumed for much longer than it had done, and could not have led to a Revolution. Though the fact that the Army were the "mainspring of the Revolution" seems somewhat aggressive, it did deter more radical change. Opponents to the King did carry with them very radical ideas. Opponents included Puritans, militant Presbyterians and radical sectaries. Each group had different radical ideas. The Puritans wanted to maintain the Established church and retain a reformed episcopacy. There aims were to get rid of the "remnants of popery". The Presbyterians wanted pretty much the same. They accepted the Established Church but wanted to change the way it was governed from the Episcopalian to the Presbyterian form. ...read more.

In order to achieve their aims, 40 Diggers, led by Gerrard Winstanley and William Everard, began digging uncultivated lands, making them suitable for farming etc. However, the New Model Army dispersed of them and both leaders were later arrested. Again, the New Model Army and "deterred more radical change" and maintained the force that was to be the "mainspring of the Revolution". In conclusion, the Army was the "mainspring of the Revolution and the force that deterred more radical change". However, an ongoing bad relationship between King and Parliament influenced this. If their disagreements and arguments had not reached stalemate, perhaps the Army would not have become such a politicized force. The Army deterred social radicals though. Groups such as the Puritans, Presbyterians, the Levellers and the Diggers all failed to gain complete control even though they did try. The Army intervened by using force and stop radical succeeding: "This was a revolution in that it involved a change of a political system by force" (Christopher Hill). This quote sums up the situation completely. The political system was changed due to the force of the New Model Army. Finally, the English Revolution had took place and though the Monarch was restored in 1660, "there could be no question of putting it back to where it had stood before the Civil War" (R.C Richardson), due to the actions of the New Model Army sparking off and making a Revolution inevitable. ...read more.