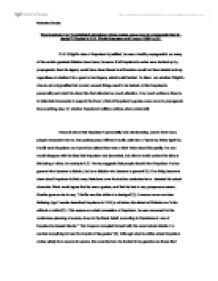 Was Napoleon I an &quot;Unprincipled adventurer whose genius owes more to propaganda than to deeds&quot;? [Quoted in D.G. Wright Napoleon and Europe (1984) p.93]

Was Napoleon I an "Unprincipled adventurer whose genius owes more to propaganda than to deeds"? [Quoted in D.G. Wright Napoleon and Europe (1984) p.93] D.G. Wright's view of Napoleon is justified, he was a terrific propagandist, as many of the worlds greatest dictators have been; however if all Napoleon's works were backed up by propaganda, then his legacy would have been flawed and therefore would not have lasted as long regardless of whether it is a good or bad legacy which is left behind. To discover whether Wright's view is not only justified but correct, several things need to be looked at, like Napoleon's personality and what it is about him that attracted so much attention. How much evidence there is in historical documents to support the theory that all Napoleon's genius owes more to propaganda than anything else. Or whether Napoleon's military actions show actual skill. Records show that Napoleon's personality was domineering, and is what many people remember him for, his contemporary William Hazlitt, calls him a "tyrant by divine right"(1). Hazlitt sees Napoleon as a tyrant but claims there was a kind virtue about this quality. ...read more.

As he took control of the government as well as the army, his attention naturally became more divided, but because of his desire for military glory, he did not make the decisions about the running of France for himself. There are many things in French history, that Napoleon is given unfair credit for; for example the Napoleonic code, the civil government system and the metric system. These were all the work of other people that had began while "he was still an unknown artillery subaltern" (1), however most of the work that went in the Napoleonic code, or code Napoleon were based on his own ideas. There are however factors that show that Napoleon was a principled military leader. He fully exploited the innovations in Warfare, he used the newest forms of military skill. The French Infantry and Cavalry were among the best in Europe, and were used more effectively with the infantry fighting in squares to keep all angles covered, to have better defense (5). Napoleon was among the first Generals to be able to mobilize massive armies; he also initiated the idea of self-contained Corps D'Armee of between 15,000 and 30,000 men advancing separately. ...read more.

He sponsored a major program of intellectual and archaeological study of the country". However, Rapport comments that the British thwarted this plan. This shows that Napoleon was not purely interested in military gains. He wanted to lead to further education of the French. In conclusion, the idea of the Napoleonic legend can be flawed depending on the historical point of view taken. Napoleon like many leaders of powerful country had his successes and his failings. Napoleon was a good diplomat, and he did not spend all of France's money on building statues and commemorations to himself. However due to his temperament, he can be considered unreliable. D.G. Wright's comment that he was an "unprincipled adventurer whose genius owed more to propaganda than to deeds" is however far from the correct view that should be had of Napoleon. Most of his judgements in warfare were well calculated. He did make errors, and he could be heavy handed with the treatment of people. Nevertheless, he was a good commander, and he was generally fair unless pushed to his limits. He did use propaganda but only to back up the things that he was actually doing. ...read more.