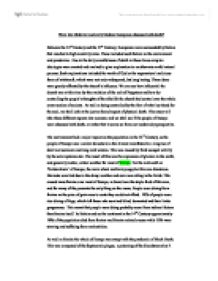 Were late Medieval and early Modern Europeans obsessed with death?

Were late Medieval and early Modern Europeans obsessed with death? Between the 14th Century and the 17th Century, Europeans were surrounded by factors that resulted in high mortality rates. These included such factors as the environment and pandemics. Due to the daily eventfulness of death in these times complex ideologies were created and evolved to give explanation to an otherwise awful natural process. Such explanations included the wrath of God or the supernatural malicious force of witchcraft, which were not only widespread, but long lasting. These ideas were greatly affected by the church's influence. We can see how influential the church was at this time by the evolution of the cult of Purgatory and how by controlling the people's thoughts of the afterlife the church had control over the whole cross-section of society. As well as being controlled by the fear of what lay ahead for the soul, we shall look at the just as feared aspect of physical death. This essay will take these different aspects into account, and we shall see if the people of Europe were obsessed with death, or rather that it seems so from our modern day perspective. ...read more.

The people of Europe believed that they were not only victims of famine and disease, they also believed that illness and death could occur due to malicious and supernatural causes. This was the idea that began the witch craze. When the Dominican Order monks, Kr�mer and Sprenger published the 'Malleus Maleficarum' in 1486, suggesting the correct way to detect and punish witches the idea of mass persecution spread across Europe. It was still a prominent idea in the 16th Century when Martin Luther used the idea of witchcraft and magic to slander the Catholic Church and its Saints days of celebration. Due to this Protestants persecuted more women than Catholics, thus we can see a geographical distinction in the areas more affected by the witch craze. Germany for example, saw 63 women killed in Wiesensterig in 1563. This up until that date was the biggest number of witches to be killed at one place and time. The aspects of death we have so far looked at all have their individual ideologies based deeply in religion. Aspects of the spirit after death were dealt with by the church as well. ...read more.

The idea that a corpse could rise again was based on the horrific fact that when mass graves were introduced at a time of disaster, they tended not to be deep enough thus they would rise to the surface. This caused not just a smell but fear of the dead thus the graveyard that was at the centre of community to be relocated to the edge of a village or town. This essay has looked many different factors of death in the late medieval and early modern Europe. I think the fact that death occurred frequently due to illness such as plague and starvation heightened the idea of mortality. It would have been further heightened by the religious ideas of the afterlife and purgatory, as their lives were meant to be used for preparation for death and as Christians they were not meant to fear it but embrace it. For many it could have been seen as equalling out the unfair hierarchy of society, and the persecution of minorities. However it was also used as a punishment for those who threatened Christianity. The fact that we in the modern day do not dwell on death does emphasise their dependence on it. However I think we still share the same morbid fascination with death. ...read more.