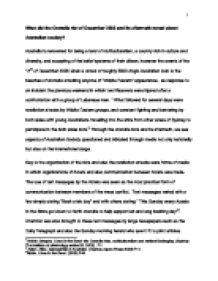 What did the Cronulla riot of December 2005 and its aftermath reveal about Australian society?

What did the Cronulla riot of December 2005 and its aftermath reveal about Australian society? Australia is renowned for being a land of multiculturalism, a country rich in culture and diversity, and accepting of the belief systems of their citizen, however the events of the 11th of December 2005 when a crowd of roughly 5000 Anglo Australian took to the beaches of cronulla attacking anyone of "Middle Eastern" appearance, as response to an incident the previous weekend in which two lifesavers were injured after a confrontation with a group of Lebanese men. 1 What followed for several days were retaliation attacks by Middle Eastern groups, and constant fighting and bantering by both sides with young Australians travelling into the shire from other areas of Sydney to participate in the both sides riots.2 Through the cronulla riots and its aftermath, we see aspects of Australian Society questioned and ridiculed through media not only nationally but also on the international stage. Key to the organization of the riots and also the retaliation attacks were forms of media in which organizations of rioters and also communication between rioters was made. ...read more.

John Howard commending the Riots stating that ``Attacking people on the basis of their race, their appearance, their ethnicity, is totally unacceptable and should be repudiated by all Australians irrespective of their own background and their politics,'', however Howard refused to label Australia as a racist country ``I believe yesterday's behaviour was completely unacceptable but I'm not going to put a general tag of racism on the Australian community" 10. The Cronulla Riots was not however a problem which is only faced in Australia but rather a universal problem in which race riots have also occurred in countries such as Canada, France and Britain. Cronulla riots also revealed a deep misconception and view of the "Middle Eastern" community in Australia, an image based on violence and terrorist attacks which were highlighted in the media.11 Cronulla riots was claimed to be a war on bad behaviour demonstrated on the beach by Lebanese groups rather than on race, however these motives are questionable with many rioters donning t-shirts with slogans such as "ethnic cleansing unit"12 . At the time of the Cronulla riots there was a lot of negative media surrounding the middle eastern community of the world with terrorist attacks such as 9/11 and also the Bali bombing ...read more.

Many believed that the Lebanese and Muslim Culture and way of life was not mixing into the Australian lifestyle and tradition's which were causing problems such as their lack of respect for women. There is also clear tribes/clans in the middle eastern society of Australia in areas in which there is a large middle eastern population such as Lakemba, Punchbowl and Bankstown with many of these Lebanese tribes entering the Sutherland Shire in car loads after already being warned to stay away due to the riots to retaliate against the attacks. Cronulla Riots reveals the tribes and societies within the Australian society as a whole and the lack of communication between these communities, however did not reveal much on Australia as a whole, as it is inaccurate to represent Australia as a racist society by the actions of only a minority, the Cronulla Riots also reveals the negative impact of media on issues in society and how influential what is reported can be on society, even if the information has been taken out of context. It is clear that within the Multicultural Society of Australia there are evident rifts between culturally diverse communities however this is also a universal problem which is not only faced by Australia. ...read more.