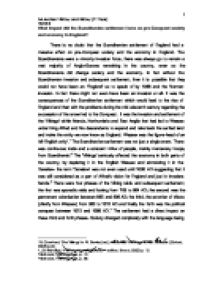 What impact did the Scandinavian settlement have on pre-Conquest society and economy in England?

This meant as a result that Alfred made two key reforming policies, the educational programme and the burghal system. The Scandinavians had been seen as a punishment from God on an unworthy people and so Alfred tried to change this with the educational programme whilst setting out a defence against the threat with the burghal system.18 However the Danelaw became a society which had been radically transformed into one of a more multi-cultural society.19 In the Danelaw, the Vikings integrated well into society, so much so that they effectively 'disappeared' and yet, in places like the Isle of Man they kept themselves and their culture, distinctively separate from the native inhabitants.20 Therefore it can be argued that the place was mightily important as to prove whether integration could occur. It is possible that the inhabitants of the Isle of Man were treated differently by having too strange a culture compared to the English, equally valid is that it was most probably the Norwegian conquerors who inhabited the island as they did the west of England whereas it was the Danes who took control of the East and the central proportions of England. One of the major ways in which the settlement can be proved is the language and within this is the naming of places. These could be either names ending in '-by' or '-thorpe', for example 'Oadby' or 'Scunthorpe', which were both Scandinavian words or equally a place name could change to become a Grimston hybrid, with the ending of the name remaining but the beginning being changed to one of a Scandinavian origin. ...read more.

The economy of England by the Conquest had stabilised although there could have been improvement, trade was flourishing however. The new disruption of land was new especially with it being sold on. The Scandinavians definitely brought about a new way of life in some respects with their settlement. However they did farm in the same way and so they did not in that respect bring about anything new. The settlers changed the ethnic situations and the 'political pattern of the natural society' rather than anything substantially physical, barring possibly the economy in terms of the money from it.32 The 'Vikings were not beyond the pale of civilised life'; they were able to show many values and practises to their neighbours.33 For the vast majority of peasant farmers the Scandinavian settlement probably meant little more than a change in whom it was that they paid their taxes to.34 Also it was the political conquests as much as the scale of the settlement that determined the Scandinavian impact.35 It was within the second quarter of the tenth century that it could be seen within the Danelaw that there was a well-established Anglo-Scandinavian society which provided the English with peace for several decades. This was only broken when more invaders came for extorting tribute in the late tenth century.36 Overall the Scandinavian settlement did have some huge impacts on the society and economy and helped to form the country before and even after the Conquest of England. After all, the Normans were originally of Scandinavian origin themselves. ...read more.