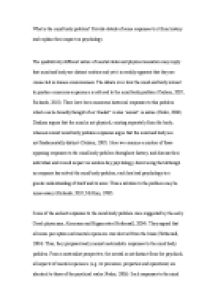 What is the mind body problem? Provide details of some responses to it from history and explain their impact on psychology.

﻿What is the mind body problem? Provide details of some responses to it from history and explain their impact on psychology. The qualitatively different nature of mental states and physical sensation may imply that mind and body are distinct entities and yet it is readily apparent that they are connected in human consciousness. The debate over how the mind and body interact to produce conscious experience is referred to the mind body problem (Carlson, 2005; Richards, 2010). There have been numerous historical responses to this problem which can be broadly thought of as "dualist" versus ?monist? in nature (Fodor, 2006). Dualism argues that the mind is not physical, existing separately from the body, whereas monist mind body problem responses argue that the mind and body are not fundamentally distinct (Carlson, 2005). Here we examine a number of these opposing responses to the mind-body problem throughout history, and discuss their individual and overall impact on modern day psychology, discovering that although no response has solved the mind body problem, each has lead psychology to a greater understanding of itself and its aims. Thus a solution to the problem may be unnecessary (Richards, 2010; McGinn, 1989). Some of the earliest responses to the mind-body problem were suggested by the early Greek physicians, Alcemaon and Hippocrates (Hothersall, 2004). ...read more.

In response to Hobbes suggestions, Rene Descartes conceived of a dualistic response to the problem (Carrier, 1995). Descartes asserted that the body is a mechanistic entity which is completely distinct from the immaterial mind (Hatfield, 2007). This model, referred to as Cartesian Dualism, differed from earlier dualist responses to the mind body problem, as Descartes took a connectivist perspective, arguing that though distinct, the mind and body were connected (via the pineal gland) and that the immaterial mind could influence the material body through this connection and vice-versa (Shultz & Shultz, 2004 ). Cartesian Dualism may be viewed as influential to psychology?s development as this perspective takes into account the qualitatively different experiences of the mental and the material. Further it acknowledges that there must be connection between them. These are fundamental concepts within psychology, both historically and contemporarily (Hatfield, 2007). However, it can also be argued that Descartes? ideas about the immaterial nature of the mind had a negative impact on the development of psychology as a scientific discipline. German philosopher Kant, argued that an immaterial conception of the mind meant that the mind could not be observed or measured in an empirical sense, and as such the study of the mind (psychology) ...read more.

McGinn (1989) argues that the human mind may be incapable of understanding the origin of its own consciousness (a concept he terms ?cognitive closure?). Thus psychology may never be able to explain this process and further, perhaps solving the mind body problem is not philosophically or scientifically necessary for psychology to continue with its exploration of mind and behaviour (McGinn, 1989). In conclusion, from the early materialistic monism of Hippocrates and Aristotle, to the dualism of Descartes, each response to the mind body problem has impacted psychologies understanding of the interaction between the mind and body, but also, has furthered the disciplines understanding of itself. Through incomplete responses to the mind body problem, Hippocrates signed-posted the ?mind in the brain?, Aristotle directed attention toward concepts for investigation, and Descartes highlighted the difference in qualia and connected nature of the mental and psychical (Hatfield, 2007; Hothersall, 2004; Carrier, 1995). Modern responses tend to focus on materialism and have lead to progress in psychologies understanding of how brain activity relates to mental experience, yet the understanding is incomplete (Humphries, 2000; McGinn, 1989). Perhaps psychology as a disciple needs to accept that while the intractability of the mind body problem is apparent, the development in understanding gained in trying to solve the problem out-weights the need for a definitive solution. ...read more.