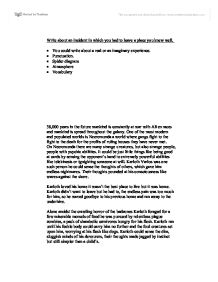 Write about an incident in which you had to leave a place you knew well.

Write about an incident in which you had to leave a place you knew well. * You could write about a real or an imaginary experience. * Punctuation. * Spider diagram * Atmosphere * Vocabulary 38,000 years in the future mankind is constantly at war with Alien races and mankind is spread throughout the galaxy. One of the most modern and populated worlds is Necromunda a world where gangs fight to the fight to the death for the profits of ruling houses they have never met. ...read more.

Karloth Varlos was one such person he could sense the thoughts of others, which gave him endless nightmares. Their thoughts pounded at his consciousness like waves against the shore. Karloth loved his home it wasn't the best place to live but it was home. Karloth didn't want to leave but he had to, the endless pain was too much for him, so he waved goodbye to his previous home and ran away to the underhive. ...read more.

Fired by the strength of desperation Karloth drove the zombies back with an effort of will, quelling their killing instincts so that they stood by. He lay there crippled and helpless with the zombies all around him as the zombie plague they carried ate into his brain. Hours passed but somehow he clung to the thin thread of life by exhausting his remaining power to the plague zombies so that he could survive. In time the plague won through and Karloth thought why did he leave home? ...read more.