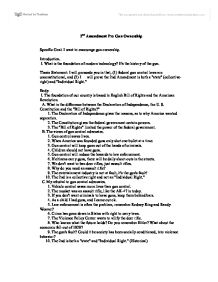 2nd Amendment Pro Gun Ownership Specific Goal: I want to encourage gun ownership. Introduction. I. What is the foundation of modern technology? It's the history of the gun. Thesis Statement: I will persuade you in that, (1) federal gun control laws are unconstitutional, and (2) I will prove the 2nd Amendment is both a "state" (collective-right) and "Individual Right." Body. I. The foundation of our country is based in English Bill of Rights and the American Revolution. A. What is the difference between the Declaration of Independence, the U. S. Constitution and the "Bill of Rights?" 1. The Declaration of Independence gives the reasons, as to why America wanted separation. 2. The Constitution gives the federal government certain powers. 3. The "Bill of Rights" limited the power of the federal government. B. The views of gun control advocates. 1. Gun control saves lives. 2. When America was founded guns only shot one bullet at a time. 3. Gun control will keep guns out of the hands of criminals. 4. Children should not have guns. 5. Gun control will reduce the hazards to law enforcement. 6. If citizens carry guns, there will be daily shoot-outs in the streets. 7. We don't want to ban deer rifles, just assault rifles. 8. Why do you need an assault rifle? 9. The entertainment industry is not at fault, it's the gun's fault! 10. The 2nd is a collective right and not an "Individual Right." C. My rebuttal to gun control advocates. 1. Vehicle control saves more lives than gun control. 2. The musket was an assault rifle, like the AK-47 is today. 3. If you don't want criminals to have guns, keep them behind bars. 4. As a child I had guns, and I came out ok. 5. Law enforcement is often the problem; remember Rodney King and Randy Weaver? 6. Crime has gone down in States with right to carry laws. ...read more.

Remember a revoked privilege can not be challenged on Constitutional grounds, but a revoked Right can be Constitutionally challenged. Keep Your Rights, and thus your serial number to yourself. My call to Action: Protect your gun rights; join both the National Rifle Association and Texas State Rifle Association. Vote for pro-2nd Amendment candidates. Write your representatives in favor of the 2nd Amendment, and take "Responsibility" for your life, liberty, and happiness, go buy a "GUN". In conclusion the 2nd Amendment did not get in the "Bill of Rights" by accident. It was put there to give the people the final say in our governments system of checks and balances. The people are the final check in the system, 1st by the vote, and if the vote is subverted then by the gun. I would like to end my speech with Patrick Henry's famous quote. "I know not what course others may take, but as for me, give me liberty or give me death, if this be treason, make the most of it." Bibliography Schmidt, Shelly, and Bardes "AMERICAN GOVERNMENT AND POLITICS TODAY" West Publishing Company, 1991-92. Adams, Les "The Second Amendment Primer" Odysseus Editions, 1996. C. Q. Researcher from Temple College Library, June 10, 1994. From the Internet, The National Rifle Association, Handgun Control Inc., Violence Policy Center, The Department of Transportation, The Journal of Firearms and Public Policy, and Gun Owners of America. Questions for discussion. 1. From a historical point of view what was the Framer's intent? 2. Who is the "Bill of Rights" referring to when it uses language like "the people"? 3. When we look at the 2nd Amendment what does past practice indicate? 4. Is the "Bill of Rights" a living/breathing (evolving standards) document or a concrete document? 5. When interpreting the "Bill of Rights" does one give a consistent interpretation to all Ten Amendments? 6. What is the difference between a privilege and a RIGHT? ...read more.

By paying Americans not (who will not work) to work, or allowing Americans to have 15 credit cards, is not promoting the general Welfare. Promoting the general Welfare is cutting taxes, the government not treading on "The Bill of Rights" and encouraging Individual Responsibility. The government can provide for the "general welfare" only if the provision is within the power listed in "this (the) Constitution". --- Please remember, some people will try to tell you there is an elastic clause in the Constitution, but as of yet I can not find it. Show Me! There ain't one! Read the Tenth Amendment! There is cost and benefits to everything; the benefits of gun ownership out weight the cost. Read any book on Stalin or Hitler (talk about Death by Government in the millions). The Framers had it right, with the 2nd Amendment, as an "Individual Right". All Rights under the U.S. Constitution are vested in Individuals. The government has no rights, only power, and power corrupts. The Constitution is in place to set limits on that power. The United Nations constitution "grants rights", but this is a play on words because "granting rights" is another way of granting a privilege, and government can revoke a privilege. Governments do not confer Rights only God does. The United States Constitution merely enumerates those Rights, but does not "grant rights". Only God Grants Rights and the U.S. Constitution protects those Rights by "enumeration" (listing). See the 9th Amendment! The RIGHTS of the INDIVIDUAL were inspired by GOD and the Framers put that inspiration into words called the "Bill of Rights". Laws of God + Laws of Nature = Natural Rights, which are unalienable (Bill of Rights). Our Bill of Rights is not negotiable. A Bill of Rights that means what the majority wants it to mean is worthless. --- Justice Antonia Scalia, Supreme Court Justice. [The Bill of Rights was put in place to reduce the power of the federal government and to protect minorities, like gun owners.] ...read more.