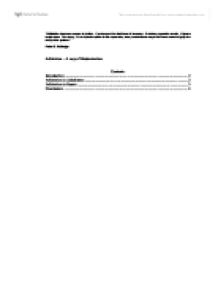 Comparing Arbitration in Uzbekistan and Russia.

"Arbitration improves access to justice. It enhances the likelihood of recovery. It delivers speedier results. It keeps costs down. For many, it is a superior option to the expensive, slow, cumbersome ways that have come to typify our civil justice system." Peter B. Rutledge Arbitration - A way of Modernization. Contents: Introduction: 2 Arbitration in Uzbekistan: 2 Arbitration in Russia: 3 Conclusion: 4 Introduction: In the past decade, the need and importance of an alternate to litigation has increased immensely. Thus leading to an increase in the development and demand of arbitration. Arbitration is the hearing of a dispute by an independent third party chosen by the parties involved in the dispute. The decision reached by the arbitrator is generally binding.1 Nowadays, in the fast moving business world, time is money. Since litigation can be a very lengthy process in resolving disputes, most of the businesses these days prefer to opt for arbitration instead of litigation. Arbitration usually takes up to 3-4 days (in most modern jurisdictions) in resolving disputes , while in litigation it could take you up to 3-4 years (in some cases even more). ...read more.

The most "attractive" feature of arbitration is that the arbitrator panel can include experts from other countries. This is a very important feature because this is a way of ensuring the satisfaction of foreign entities which are involved in Uzbekistan. Many experts believe that the development of international commercial arbitration will help to attract foreign investments, as foreign entrepreneurs are used to resolve disputes in arbitration and this will be an assuring factor for them. According to Carlos Martinez, the development of the system of arbitration is of high importance, especially in the modern market economy. Today time is expensive for businessmen and it is usually wasted in litigation, which eventually leads to loss of money. Therefore, businessmen are seeking an effective way of resolving disputes in a short period of time. Nowadays, there is a trend to develop the arbitration system because the traditional way of resolving disputes (i.e. litigation) takes a long time. There is and increasing demand for such services in Uzbekistan.5 Moreover, the development of arbitration system in Uzbekistan will put the foreign entities in an advantageous position because the service of arbitration can be used in Uzbekistan for a lower financial cost. ...read more.

Conclusion: When we compare the Uzbek arbitration system with that of Russia, the differences are evident. The Russian system is one which has been operating for quite some time now and is far more experienced and organized one. Whereas, the Uzbek system has just begun its journey and does not have much experience. Moreover, there are certain divisions in the Russian system (i.e. international arbitration, domestic arbitration and state arbitration). On the other hand the Uzbek system has not yet developed such kind of divisions. The Russian system is governed by a number of international conventions; this is not true for the Uzbek system. Considering how Uzbekistan is a young country in transition, it does not have many foreign investors and therefore the opportunity to develop is not as huge as it is in Russia. In conclusion, it is evident that the importance of arbitration has increased with time and will keep on increasing. Litigation is already becoming a thing of past in private law. Almost all the developed legal systems use arbitration as a way of resolving disputes. The advantages are obvious and the whole process of arbitration is very beneficial to both the parties involved. Therefore, I believe that by introducing the system of arbitration the Uzbek legal system has taken a huge step towards achieving a more democratic and brighter future. ...read more.