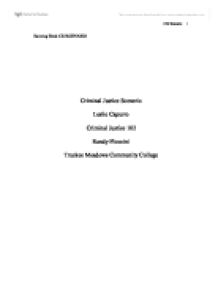 Running Head: CRJ SCENARIO Criminal Justice Scenerio Leslie Capurro Criminal Justice 102 Randy Floccini Truckee Meadows Community College In this paper I will discuss what I would morally and personally do in a scenario. The scenario places me in a tough position between my job, and my significant other. I have to choose to give my significant other up to the police while risking my job, or still risk my job and not turn my significant other in. Criminal Justice Scenario One morning I woke up at my usual time, and I continued on with my daily routine as I headed off to my job at the Reno Police Department. I was more tired that day than normal because my husband had come home the night before acting strangely. I thought that was going to be a busy day. We'd already gotten a call to keep an eye out for a red Mercedes-Benz, apparently it was involved in a hit and run accident the night before. With no luck finding the Mercedes-Benz I headed home at the end of my shift to find a rental car in the garage. I asked my husband why he had the rental car and he would only tell me that someone had backed into the red Mercedes-Benz, and that he had dropped it off to be repaired at a shop. ...read more.

contributes to the welfare of its key stakeholders, and (b) respects the rights of all constituents affected by its operations"(Dictionary.com). With that being said, I feel that as an honest person I must uphold the Code of Conduct regardless of the fact that it may be losing someone I love, or something I love. At least I will be able to know that I did the right thing for myself. I'm not a very religious type of person, but even knowing that I've lied about something makes me want to go to confession as I was raised Catholic. As a person I am not comfortable with lying, or keeping secrets that need to be told to make things right, or help the police and things of the like. I believe strongly in karma. If my husband could hold in a secret as big as this one for so long it really makes me wonder what else he could be hiding. Is this the first time he has committed a major felony? It really makes me question our marriage actually. As a married couple you're supposed to be able to confide in each other no matter what, and keep secrets is not a healthy way to manage a marriage. If my husband could keep this information from me for so long perhaps he has kept other things from me and deserves what is coming to him as karma would say. ...read more.

Besides if I were to wait to tell the police I would more than likely tell friends or family of mine in the mean time because I am not very good at keeping secrets like that to myself. They really do eat at me, and I would need to be able to get it off my chest as soon as possible. I think I would also offer myself out there for a polygraph test to assure them that I am not in any way, shape, or form lying about it. In conclusion to this paper I come to the point that no matter what happened between my husband and I, or my job and I, I would have to tell the police that my husband is the man that they are looking for to solve the hit and run case. It would be morally, ethically, and even religiously wrong of me to know go directly to the authorities on said case. I definitely do not want to end up like friends of mine who have committed suicide for keeping in secrets. I wouldn't divorce my husband for the accident as it was just an accident, but I would not be happy with him by any means. If he commit's a crime, he needs to be held accountable for his actions as does anyone else who commit's a crime or in this case a big time felony. Reference Farlex. (2008). The Free Dictionary. . http://www.thefreedictionary.com/code+of+conduct; originally accessed in November of 2008. CRJ Scenario ...read more.

A well written essay on this niche topic.

The student could do more to frame the piece using moral or religious codes, as it currently reads a little too personally.