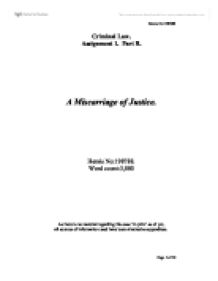 Criminal Law - A Miscarriage of Justice.

Criminal Law. Assignment 1. Part B. A Miscarriage of Justice. Hemis No:198788. Word count:3,000 As there is no material regarding this case 'in print' as of yet, all sources of information used have been attached as appendices. Sally Clark. o On the 9th November 1999, after a four week trial at Chester Crown Court, Sally Clark was found guilty and convicted of the murder of her two children. o The Criminal Cases Review Commission, the body which investigate miscarriages of justice in England, sent Sally Clark's case to the Court of Appeal. o On the 2nd October 2000 at the Court Of Appeal, the guilty verdict was upheld. They ruled that the case against Sally Clark was 'overwhelming' despite the support of fresh evidence. o The Criminal Cases Review Commission has ordered, that the case should go back to the Appeal Court because of the new medical evidence put forward, contained in a report overlooked at the original trial, which shows that Harry, the second baby to die, suffered from staph aureus at the time of his death, which almost certainly killed him o Sally is now serving the forth year of her life sentence. The case of Sally Clark is a long and difficult one to understand. There are no precedents in this area of law and no books have been published regarding this case, as it has not yet been recognised by the courts. This is a landmark case and Sally Clark is not the only innocently convicted woman awaiting justice. Donna Anthony was convicted on Meadows Law and is in Durham prison. Maxine Robinson was given two life sentences at Sheffield Crown Court. The definition of a miscarriage of justice is a clear one, a failure to attain the desired end result of 'justice', and it can most definitely be applied in Sally's case. In order to understand how this case was tried and how the verdict of guilty was reached, the following questions have to be defined. ...read more.

Expert witnesses occupy a special position in court 9in that they may give evidence of opinion as well as fact. Danger can arise when the jury is unclear as to which is which, as their evidence is regarded as somehow infallible and the pristine truth. So-called experts are a mixed bag,10 a worrying number are ready to advance opinions in fields of expertise well outside their own. This leads to advise which is at best 'unhelpful' and at worst 'misleading'. The pivotal evidence which has persuaded the Criminal Cases Review Commission to refer Sally's case back to the Court of Appeal turns on the reliability of Dr Williams, as the medical evidence contained in his report which was not disclosed at the original trial shows that Harry, the second baby to die had suffered from a natural disease which had almost certainly killed him. During the trial there were numerous other flaws identified in the Crown's pathological evidence and, although attempts were made to counter them, the evidence was deemed sufficient to be 'beyond reasonable doubt' by the jury and, later, passed muster with the Court of Appeal which held the medical evidence incriminating Mrs Clark to be 'overwhelming'. The prosecution also painted a sinister picture of family life in the Clark household, they said Sally was tired, depressed and had resented the interruption that the children had made to her career. Nothing could have been further from the truth but the defence were never given the chance to respond to the character assassination. There is no doubt that with days of conflicting forensic evidence at the initial trial, the Crowns case was very much bolstered by the testimony of such an eminent paediatrician. However, I would like to point out that throughout this case the prosecution did not believe that the deaths of the two babies were from S.I.D.S. they thought it was murder. ...read more.

It should not be acceptable that the defence can employ an expert to say one thing and the prosecution can find one diametrically opposed. How can the jury possibly decide the fate of the defendant by choosing which of the two experts to believe, when both are portrayed as the truth.? Expert witnesses who are obviously extreme and biased should be disallowed in the same way a biased jury members. * Meadows Law. If Meadows Law is fatally flawed then there has not just been one miscarriage of justice, but a great number, ruining the lives of countless people who are either in prison or who have had their babies taken away from them. When Sally's conviction is overturned, all the case that he has given evidence in should be scrutinised. * Disclosure. It should be made the responsibility of the prosecution team to make sure they are in possession of all undisclosed material, so that a professional decision can be made about it. There must be a system of accountability to avoid disputes over who is responsible for passing on / disclosing relevant documentation. The Crown prosecutors should regard themselves as the trustees of information not as the monopoly owners. * Jury Comprehension of Complex medical Issues. The jury not only represents the public at the trial, but its presence ensures a publicly comprehendable explanation of the case, but in some cases like this one, the medical information was so complex that only the experts were capable of understanding the allegations, consequently there was not an explanation that the jury could understand. I do not think that the public would or should be satisfied with a criminal justice system where citizens stand at risk of imprisonment for lengthy periods following trials where the state cannot explain its evidence in comprehensible terms. Bibliograpghy. Justice in Error. C.Walker & K.Starmer. Blackstone Press. 1993 Criminal Justice and The Human Rights Act 1998. Cheney,Dickson,Fitzpatrick, Skilbeck, &Uglow. Jordons. Bristol, U.K. (2001) The English Legal System. Slapper & Kelly. Cavendish Publishing. London. 2001. Criminal Law. Reed & Seago. Sweet & Maxwell. London. 2002. ...read more.

A well written and very comprehensively researched essay. Though now outdated, much of the content remains accurate and valid.