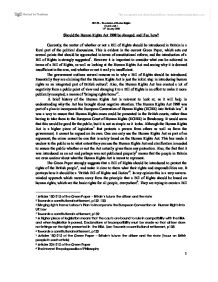 Should the Human Rights Act 1998 be changed, and if so, how?

Currently, the matter of whether or not a Bill of Rights should be introduced in Britain is a focal part of the political discussions. This is evident in the current Green Paper, which sets out several points that should be approached in terms of constitutional reform, and the introduction of a Bill of Rights is strongly suggested[1]. However it is important to consider what can be achieved in terms of a Bill of Rights, as well as looking at the Human Rights Act and seeing why it is deemed insufficient in the area, and whether or not it really is insufficient.

The government outlines several reasons as to why a Bill of Rights should be introduced. Essentially they are claiming that the Human Rights Act is just the initial step in introducing human rights as an integrated part of British culture[2]. Also, the Human Rights Act has created a lot of negativity from a public point of view and changing it to a Bill of Rights is an effort to make it more publically accepted; a means of ‘bringing rights home’[3].

The Green Paper strongly suggests that a Bill of Rights should be introduced to protect the rights of the British people[7], and make it clear to them what their rights and responsibilities are. It portrays how it should be a ‘British Bill of Rights and Duties’[8]. In my opinion this is a very narrow-minded approach which moves away from the principle that a Bill of Rights should be based on human rights, which are the basic rights for all people, everywhere[9]. They are trying to create a Bill of Rights that protects those of British citizenship. In the process of creating a British Bill of Rights, the government is attempting to move away from the ECHR and to create something that is their own. This in some sense is rather pointless, as the ECHR was mainly created by British lawyers. It also portrays how although they are unhappy with the Human Rights Act they will not repeal it, as then they would be back to solely having the ECHR as a human rights doctrine, leaving the road to Strasbourg as the only option in human rights cases. This, to me, makes it seem as if creating a Bill of Rights is a power-play and a means of immigration control[10] as well as simply being a publicity stunt to make it seem as if something is being done for the people. Any successful Bill of Rights would have to be based on the Human Rights Act anyway. In some sense, it is a mere matter of changing the name and perhaps phrasing the articles a little differently.

If the government were to go through with creating a Bill of Rights such as the USA or France (which is slightly hypocritical as they are taking their inspiration from other countries in an attempt to nationalise themselves in a move away from the ECHR[11]) they would have to do more than amend the Human Rights Act. A Bill of Rights is meant to be something that is fundamental to the nation and is built upon the substance of the constitution[12]. It is also a way protecting people within the given jurisdiction, so it should not only extend to those of British citizenship. If the government really wants to make it clear to the people what their rights and responsibilities are, then a Bill of Rights cannot full encompass this. To fully show the people what their rights are, the constitution would have to be codified so that a Bill of Rights can be created to support it. This aspect is briefly mentioned in the Green Paper[13] which portrays that there is some awareness of the importance of a codified constitution in relation to a successful Bill of Rights as the government sees it. There is also acknowledgement of the time it could take to fully make these changes[14].

From the government’s perspective, bringing in a Bill of Rights is a way to protect those of British citizenship and to create more awareness to reduce the level of negativity that the Human Rights Act has created. In my opinion, there is some sense in amending the Human Rights Act and changing it so that it becomes a Bill of Rights, but not for the reasons the government gives.

Firstly, changing the name to ‘Bill of Rights’ would help to create unity and make it a more positive thing for the people. Calling it a Bill of Rights would make it seem as if it is meant for the people in the country, and makes it seem less like a mere piece of legislation. It can contain the same as the Human Rights Act, but the name will make it seem more like something that can be a fundamental part of society. This is due to the fact that a Bill of Rights is generally known as an important part of the foundations in which a society is built on, as the example of the USA clearly portrays.

Secondly, to further my first point, I think that as a Bill of Rights it should be entrenched so that it really becomes fundamental to society and so that it cannot in any way be overridden. This could be a rather controversial point as it may seem to come in conflict with the principle of Parliamentary Sovereignty, but if the government wishes to create a Bill of Rights for the people, to protect the people, then it must be able to do so all the time without exception. Entrenching it would be the only way to ensure the rights of the people are truly protected.

Thirdly, although it should be entrenched, it should to some extent be open to amendment. This is so that the rights of all people are constantly being protected to the appropriate extent. In human rights cases there will always be groups of people who are more vulnerable, and these groups change along with society. Today we may be looking at protecting the rights of children, women or the handicapped as they are more likely to experience human rights violations, but in a few years time we could be looking at protecting another group of people who find themselves vulnerable. Society is constantly changing, so I think it is important to ensure that a Bill of Rights can be amended to suit the time it is in. And as it would be entrenched, it would mean that it would be harder to amend it, so the right to amend it could not be abused to help those who are not in need. It will allow for control over the abuse of power.

Fourthly, if the government’s concern is the awareness – that the people in Britain do not know what their rights are – then there are ways of creating awareness that do not necessarily need for there to be much change. An example can be taken from a country such as Denmark which sends out a basic copy of the constitution to everyone when they gain the right to vote (at eighteen). Although Britain does not have a constitution they could still send out copies of the Bill of Rights so that the people know their basic rights. Eventually, if the constitution is codified, they could be sent out together so that all people in Britain are aware of the rights and responsibilities that they hold.

The Human Rights Act, even though it is seen so negatively, is an essential part of a modern society. There would be benefits in changing its name to become a Bill of Rights, but I do not think the substance of it should be changed greatly. It is still a matter of protecting the basic rights of the people and this is what the Human Rights Act does. Although it is a means of incorporating the ECHR into British law, it is based on British ideals[15] as well as human rights ideals which should simply be held as the same for all people everywhere[16]. However, by bringing in a Bill of Rights, the government is trying to make it more British, but in my opinion this means that it should build on the rights which have already been outlined and then be open to amendment so that the groups in Britain which are vulnerable can be protected. I think it is important for it to be a Bill of Rights in name, as it would appeal more to the people and that is who it is meant to protect. And most importantly, it should not only protect those of British citizenship but should extend to all under British jurisdiction. It should remain a higher piece of legislation in nature but be presented as something that can be held by the people as fundamental to the society they live in: a Bill of Rights.

[4] Towards a constitutional settlement, p132

[5] A higher piece of legislation means that the courts are bound to rule in compatibility with the HRA and when legislation is passed, Declarations of Incompatibility must be made so that all law does not infringe on the rights presented in the HRA. See: Towards a constitutional settlement, p138

[6] Towards a constitutional settlement, p135

[7] Articles 180-215 of the Green Paper – Britain’s future: the citizen and the state (focus on British people in each article)

[9] The Internet Encyclopaedia of Philosophy

[10] It seems that the focus on the Bill of Rights extending to British citizens seeks to exclude those of other nationalities even though they are under British jurisdiction.

[11] As seen in article 194 of the Green Paper – they are comparing a Bill of Rights in countries that have a strong national perception of themselves.

[16] The Internet Encyclopaedia of Philosophy