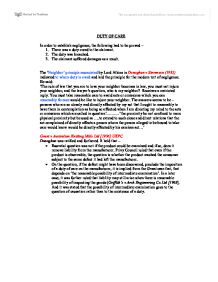 DUTY OF CARE In order to establish negligence, the following had to be proved - 1. There was a duty owed to the claimant. 2. The duty was breached. 3. The claimant suffered damages as a result. The 'Neighbor' principle enunciated by Lord Atkins in Donoghue v Stevenson (1932) indicated to whom duty is owed and laid the principle for the modern tort of negligence. He said: 'The rule of law that you are to love your neighbor becomes in law, you must not injure your neighbor; and the lawyer's question, who is my neighbor? Receives a restricted reply. You must take reasonable care to avoid acts or omissions which you can reasonably foresee would be like to injure your neighbor. The answers seems to be - persons who are so closely and directly affected by my act that I ought to reasonably to have them in contemplation as being so affected when I am directing my mind to the acts or omissions which are called in question'..........'the proximity be not confined to mere physical proximity but be used as ....to extend to such close and direct relations that the act complained of directly affects a person whom the person alleged to be bound to take care would know would be directly affected by his careless act...' Grant v Australian Knitting Mills Ltd [1936] UKPC Donoghue was ratified and furthered. It held that - * Essential question was not if the product could be examined and if so, does it remove liability from the manufacturer. Privy Council ruled that even if the product is observable, the question is whether the product reached the consumer subject to the same defect it had left the manufacturer. * On the question, if the defect might have been discovered, preclude the imposition of a duty of care on the manufacturer, it is implied from the Grant case that, that depends on 'the reasonable possibility of intermediate examination'. ...read more.

Orchard v South Eastern Electricity Board [1987] Barristers do not owe a duty to an opposing litigant in civil litigation. Welsh v CC of Merryside Police [1993] The CPS does not enjoy outright immunity. The immunity does not extend to a failure to carry out its general administrative responsibility as prosecutor to keep a court informed as to the state of an adjourned case, nor where a prosecutor had assumed such responsibility. Algouzouli-Daf v Commissioner of the Police of the Metropolis It was stated that Welsh was correctly decided but the general rule is that CPS did not owe a duty of care to private individuals aggrieved by careless decisions of CPS lawyers. Immunity for barristers and solicitors (Rondel v Worsley [1969] & Saif Ali v Sidney Mitchell & Co. [1980]) existed but the House of Lords, in a more recent development (Arthur JS Hall v Simons [2002]) abolished those rights. Police If during the course of their operation, the police negligently cause direct harm to another, they will be liable (Rigby v CC of Northamptonshire [1985]). Kinghtley v Jones [1982] Clark v CC of Northamptonshire [1999] Police had a duty to provide correct date of arrest to the prison service so that the prisoner was not detained for longer than required. Hill v CC of West Yorkshire Osman v Ferguson [1993] The Court of Appeal held that immunity applied even in the case of a known and identified individual who had been conducting a campaign of harassment against the plaintiff, ultimately with fatal consequences. Although the court accepted that there was sufficient relationship of proximity between the plaintiff's family and the investigating officer the police immunity still applied even if there was sufficient proximity, and was not limited merely to conduct in the investigation of crime but extended to conduct relating to prevention of crime. Hughes v National Union of Mineworkers [1991 Where a police officer is injured in the course of policing a serious public disorder, the senior who deployed him there is not liable. ...read more.

intends that the bidder should rely, the auditors will be under a duty of care to the bidder for the breach of which he may be liable. Henderson v Merrett Syndicates Ltd [1994] It was decided that the assumption of responsibility principle enunciated in Hedley Byrne is not confined to statements, but may apply to any assumption of responsibility for the provision of services. It was also established that once a case is identified as falling within the extended Hedley Byrne principle, there is no need to embark on any further inquiry whether it is fair and reasonable to impose liability for economic loss. It was made clear that reliance upon the assumption of responsibility by the other party will be necessary to establish a cause of action because otherwise, the negligence will have no causative effect. An existing contractual duty of care between the parties does not preclude the occurrence of a tort in the same respect. White v Jones [1995] The deceased had left a will behind excluding his daughters due to some problems before. But the problems were resolved and the deceased wanted to include his daughters in the will. Despite many attempts, the solicitor who drew up the will failed to come to the deceased to change the beneficiaries in the will. The deceased passed away before the will could be changed and the daughters were left out. The daughter took action against the negligent solicitor. The HoL found for the daughters. It was opined that: In these cases, extend to the intended beneficiary a remedy under the Hedley Byrne principle by holding that the assumption of responsibility by the solicitors towards his client should be held in law to extend to the beneficiaries who, as the solicitor can reasonably foresee, may as a result of the solicitor's negligence, be deprived of his intended legacy in circumstances in which neither the testator nor his estate will have a remedy against the solicitor. Read Contract Act (Right of 3rd Parties) 1999 ...read more.