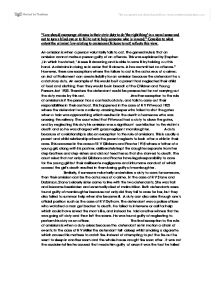 Law should encourage citizens in their civic duty to do 'the right thing' in a moral sense and not to turn a blind eye or to fail to act to help someone who is in need. Consider to what extent the criminal law relating to omissions (failures to act)

"Law should encourage citizens in their civic duty to do 'the right thing' in a moral sense and not to turn a blind eye or to fail to act to help someone who is in need." Consider to what extent the criminal law relating to omissions (failures to act) reflects this view. An omission is when a person voluntarily fails to act. The general rule is that an omission cannot make a person guilty of an offence. This was explained by Stephen J in which he stated; "A sees B drowning and is able to save B by holding out his hand. A abstains in doing so in order that B drowns. A has committed no offence." However, there are exceptions where the failure to act is the actus reus of a crime; an Act of Parliament can create liability for an omission because the defendant has a statutory duty. An example of this would be if a parent had neglected their child of food and clothing then they would be in breach of the Children and Young Persons Act 1933. ...read more.

In the case of R V Stone and Dobinson, Stone's elderly sister came to live with the two defendants. She was frail and became bedridden and eventually died of malnutrition. Both defendants were found guilty of manslaughter because not only did they fail to care for her, but they also failed to summon help when she became ill. A duty can also arise through one's official position such as the case of R V Dytham. The defendant was a police officer who watched a man get beaten to death. He failed to intervene or call for help which could have saved the man's life, and instead he told another witness that he was going off duty and then left the scene. He was found guilty of neglecting to perform his duty as an officer. The final exception to the rule of omissions is when a duty arises because the defendant set in motion a chain of events. In the case of R V Miller the defendant fell asleep whilst smoking a cigarette which caused his mattress to catch fire. ...read more.

Some countries have legislation known as the 'good Samaritan law' where a person has a duty to help someone in an emergency situation, and failure to do so can lead to prosecution. Although it ensures morality is enforced and helps to eradicate selfishness from society this law can become controversial for certain circumstances. For example, according to the good Samaritan law, an aquaphobic person who fails to jump into a lake to save someone will be prosecuted for not helping. Although this example is an extreme case, the principle is clear that a person is not always able to fulfil this duty. In conclusion I believe that the law is well provisioned to ensure that people have a duty to help others in a range of circumstances and it has successfully incorporated society's morals so that anyone who has deliberately done wrong by an omission can be found guilty for not carrying out the responsibility society expects of them. ...read more.