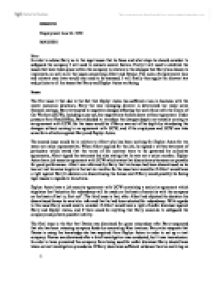 Intro In order to advise Barry as to the legal issues that he faces and what steps he should consider to safeguard the company I will need to evaluate several factors. Firstly I will need to establish the issues that have taken place within the company in relation to the changes that Barry has chosen to implement, as well as all the issues concerning Albert and Denise. The rules of employment Law and relevant case laws would also need to be assessed. I will finally then apply the relevant law and policies to all the issues that Barry and Zephyr Autos are facing. Issues The first issue it that due to the fact that Zephyr Autos has suffered a loss in business with the recent economic downturn, Barry the new managing director is determined too make some financial savings. Barry attempted to negotiate changes affecting the work force with the Union of Car Workers (UCW), including a pay cut, but negotiations broken down without agreement. Under pressure from Head Office, Barry decided to introduce the changes despite not actually coming to an agreement with UCW. So the issue would be if Barry was out of his depth by introducing the changes without coming to an agreement with UCW, and if the employees and UCW can take some form of action against Barry and Zephyr Autos. The second issue would be in relation to Albert who has been working for Zephyr Autos for ten years as a sales representative. When Albert applied for the job, he signed a written statement of particulars which stated that the terms of his contract were to be governed by collective agreements, Albert signed the statement but also stating that he was not a union member. ...read more.

Although the laws of agency may permit this, in practice it is most unlikely that either the union or its members would wish to be so bound. The case of Burton Group v Smith13 is authority for the presumption that the trade union does not act as agent for its individual members in collective agreements. Thirdly, it may be possible to incorporate the products of collective agreements (or any other terms) in to an individual's contract by conduct, in effect as part of custom and practice. It is possible for almost any term to become an express term of the contract, if agreed to by both parties. It appears that the Unfair Contract Terms Act 1977 applies to the contract of employment; authoritative cases are Johnstone v Bloomsbury Health Authority14 and Brigden v American Express Bank15 In earlier times when the law encouraged rational collective bargaining where an employer had is under a duty to disclose certain information to an independent trade union which is recognised by him. This duty was first enacted in the Industrial Relations Act 1971; it is now contained in the Trade Union and Labour Relations Act 1992, sections 181-5 and the Code of Practice No 2 'Disclosure of information to Trade unions for collective bargaining purposes', produced by ACAS pursuant to section 181(4)16. The issue in relation to Barry informing Albert that his bonus had been discontinued as he has not met his sales targets in the last six months. When Albert applied for the job, he signed a written statement of particulars which stated that the terms of his contract were to be governed by collective agreements, Albert signed the statement but also stating that he was not a union member. ...read more.

There may well be a considerable area of discretion in which several solutions might have been reasonable and as long as dismissal was within that area the employer is not to be penalised for choosing it in preference to any lesser measure31, this can be seen in the case of Trust House Forte Leisure Ltd v Aquilar32. As Barry has necessary belief in Denise's gross misconduct, then the decision to dismiss her is a standard usual outcome in a theft case. Nevertheless, to safeguard the company Barry can inform the police and have Denise criminally liable and also to reposes any information regarding the company she may have. In conclusion, after I have assessed all the issues, rules and applied them to the situation that Barry and Zephyr Auto are facing I would be able to advise them as to the legal issues and the possible steps to safeguard the company. All the legal issues that could be faced are that, firstly, Zephyr Autos would possibly be liable to pay out Albert's Bonus, as it is incorporated in the employment contact as part of the collective agreement. Secondly, Albert may have sufficient grounds to bring an action of unfair dismissal against Zephyr Autos as he had signed a binding collective agreement, which stipulates that "selection for redundancy will be made on the basis of seniority with the company on the bases of last in, first out". Finally, to safeguard the company an action against Denise could prevent her from having possession of confidential company details and she may possibly face criminal charges. Furthermore, next time Zephyr Autos ought to conduct an investigation they should take procedural steps by suspending the employee fist to prevent any complications and interference. ...read more.