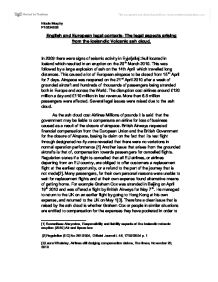 English and European legal contexts- The legal aspects arising from the Icelandic Volcanic ash cloud. In 2009 there were signs of seismic activity in Eyjafjallaj?kull located in Iceland which resulted in an eruption on the 20th March 2010. This was followed by a large explosion of ash on the 14th April which travelled long distances. This caused a lot of European airspace to be closed from 15th April for 7 days. Airspace was reopened on the 21st April 2010 after a week of grounded aircraft and hundreds of thousands of passengers being stranded both in Europe and across the World. The disruption cost airlines around �120 million a day and �110 million in lost revenue. ...read more.

Many passengers, for their own personal reasons were unable to wait for replacement flights and at their own expense found alternative means of getting home. For example Graham Cox was stranded in Beijing on April 19th 2010 and was offered a flight by British Airways for May 7th. He managed to return to the UK on an earlier flight by going to Hong Kong at his own expense, and returned to the UK on May 1[3]. Therefore a clear issue that is raised by the ash cloud is whether Graham Cox or people in similar situations are entitled to compensation for the expenses they have pocketed in order to get home. ...read more.

Being late and being absent from work can be seen as disciplinary offence, is it seen as reasonable for employers to see this as a disciplinary offence? Employees are required to attend work unless there is a valid reason for not attending such as sickness, or maternity. Should the employer have to pay employees that are not actually working? If employees are absent from work does their workload have to wait until they are back in work or does the employer have the right to impose their work on other employees? [5] In conclusion, there are many Legal issues that are raised by the Eyjafjallaj?kull ash cloud crisis; which include the liability between the state and airlines, the liability between passengers and Airlines or the liability between passengers and insurers. As well as the many employment issues that arises between stranded passengers and their employers. ...read more.