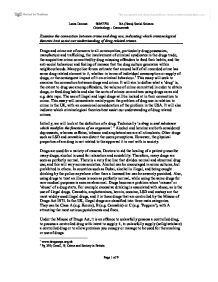 Examine the connection between crime and drug use, indicating which criminological theories best assist our understanding of drug related crimes.

Examine the connection between crime and drug use, indicating which criminological theories best assist our understanding of drug related crimes. Drugs and crime are of concern to all communities, particularly drug possession, manufacture and trafficking, the involvement of criminal syndicates in the drugs trade, the acquisitive crime committed by drug misusing offenders to feed their habits, and the anti-social behaviour and feeling of menace that the drug culture generates within neighbourhoods. Many police forces estimate that around half of all recorded crime has some drug related element to it, whether in terms of individual consumption or supply of drugs, or the consequent impact of it on criminal behaviour.1 This essay will seek to examine the connection between drugs and crime. It will aim to define what a 'drug' is, the extent to drug use among offenders, the volume of crime committed in order to obtain drugs, or feed drug habits and also the sorts of crimes committees using drugs as an aid e.g. date rape. The use of illegal and legal drugs will be looked at in their connection to crime. This essay will concentrate mainly upon the problem of drug use in relation to crime in the UK, with an occasional consideration of the problem in the USA. It will also indicate which criminological theories best assist our understanding of drug related crimes. Initially, we will look at the definition of a drug. Technically 'a drug is and substance which modifies the functions of an organism'. 2 Alcohol and heroine are both considered depressants, whereas caffeine, tobacco and amphetamines are all stimulants. Other drugs such as LSD and cannabis can distort the users perceptions. However, the physical properties of are drug is not related to the approval it is met with in society. Drugs are used for a variety of reasons. Doctors to aid the healing of a patient prescribe many drugs; alcohol is used for relaxation and sociability. ...read more.

Some figures include robbery as violent, personal or contact crime. Some figures also include sexual offences such as rape and sexual assault. This brings us to another way in which drugs and crime can be linked and that is the actual use of drugs to commit a crime. The most common form of this is know as 'Date Rape', the drug used is known as GBH. GHB also known as Bodily Harm (GBH), Liquid X, Easy Lay and other street names, is a potent date rape drug, in some ways easier to use than rohypnol, but with the same effects. It is promoted as a growth hormone aid, a diet aid and a stimulant. GHB comes in liquid form, and is often home produced by people who know a little about drugs and their effects. Due to the fact that it is in liquid form rather than tablet form it is much easier to slip into an unsuspecting females drink than some of the other date rape drugs. This is done with either an eyedropper or off a bottle cap, and only a few drops can render the victim confused, dazed, drowsy and unconscious within the space of 15 minutes. The effects can last from 2 to 8 hours. The drug is hard to detect, as it is colourless and odourless, although some reports suggest it has a slightly salty taste. Are there any factors that can contribute to a person's increased likelihood of becoming a drug user? Are men more likely to use drugs than women? What about age and social class? The recreational drug use among young people has increased in recent years. This is very problematic as young people most often can find themselves unemployed, or in full-time education, or even still at school, and be unable to legally fund expensive drug habits. This is when crime comes into play. Young people takes drugs largely for pleasure. ...read more.

Regardless of their problems, these methods of measuring illegal drug use do give some indication of the extent and changing pattern of drug abuse. In conclusion, the relationship between crime and drugs is full of many complex issues. Criminal activity involving drugs is not restricted to drugs offences, a significant minority of all crime is drug-related, i.e. the proceeds of the offence will be spent on drugs. The Home Office believes that around a third of acquisitive crime is drug-related. 12 Only some drugs are criminalized and studies of illegal drug use reveal that these are widely used in different settings from dance scenes, to cultures in which heroin can be seen as an alternative status symbol. The drugs market produces enormous profits for participants, from growers, producers and traffickers, to local, street level dealers. It also produces a large amount of secondary crime although the extent of this can be exaggerated. It has been argued that the decriminalisation of some drugs would help in the battle against drug-related crime, and Poland has taken steps towards this and has legalised all drugs, including heroin. 13 Some argue that dangerous drugs should be subject to the same licensing laws as tobacco and alcohol, as at least that way it would be easier to keep track of it. Cannabis, in particular, has a strong case for it being legalised. The side effects are less harmful than a normal cigarette or alcohol, and it has beneficial medical effects. A positive step in this direction is the fact that cannabis is being considered as a Class C drug, rather than a Class B. For some, this is the first step towards legalisation. Some also argue that more information on the taking of drugs should be available so that it can be made safer, but some see this as the tolerance of illegal drug use. The battle against drug-related crime will long and on going. It will take a lot of compromising on a lot of parts if a solution to this problem is to be reached. There is no short-term solution. ...read more.