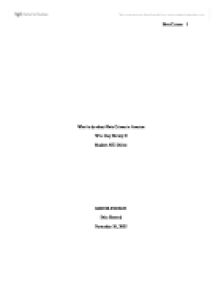 Hate crimes in this country are indeed at an all time high. According to the FBI, &quot;a hate crime is a criminal offense motivated by bias, particularly against a given race, religion, disability, ethnicity, nationality, or sexual orientation

What to do about Hate Crimes in America Wm. Guy Harvey II Student AIU Online SOC210-0504B-02 Dale Howard November 26, 2005 What to do About Hate Crimes in America Hate crimes in this country are indeed at an all time high. According to the FBI, "a hate crime is a criminal offense motivated by bias, particularly against a given race, religion, disability, ethnicity, nationality, or sexual orientation" ("Hate Crimes," 2004). The FBI recorded some 9,730 hate crimes in 2001 from approximately 12,000 police agencies around the country. This is almost a 21% jump in reported hate crimes from 2000 ("ADL Calls for Expanded Education & Training to Address Significant Increase in Hate Crimes Reported to FBI," 2002). The majority of hate crimes committed each year is surprisingly not committed by people involved with hate groups but by individual people. ...read more.

Fear, fear of what we do not know will cause us to do strange things and in this case including committing hate crimes. Fear of what we do not know is often the fault of ignorance. Hate crimes can also be caused by other outside influences such as peers, family, media, and political leaders ("Hate Violence Today," 1992). Most people hold the opinions of their friends in high regards. Most people who have been involved with a hate group are said to have joined only because it was something their friends were doing or because they felt a need to belong to a social group. Perhaps the lack of an American culture when compared to other countries causes people to join gangs and racist gangs. These types of gangs might not only meet their need to belong but also their need to lash out at someone, anyone. ...read more.

This has been seen more in reticent campaigns that use racist or homophobic implications. People that see these types of ploys could come to the conclusion that because these important people feel this way and have created a following of like thinker that it is okay for them to act and think this way as well ("Hate Violence Today," 1992). There are many things that I think could be done to minimize the occurrence of hate crimes. Educate the young early that hate is wrong. If we teach our children to be more accepting of people's differences then perhaps we can break this growing trend of hate crimes. In addition, I think the federal law needs to come up with a new definition of when and where hate crimes can occur. Currently hate crimes will only break federal law if the crime is committed on federal property or if the victim is participating in a federally protected activity. ...read more.