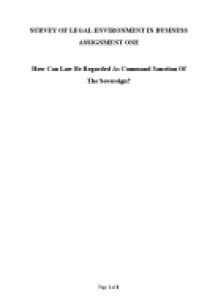 How Can Law Be Regarded As Command Sanction Of The Sovereign? Austin's Theory.

﻿SURVEY OF LEGAL ENVIRONMENT IN BUSINESS ASSIGNMENT ONE How Can Law Be Regarded As Command Sanction Of The Sovereign? Table of Contents 1. Introduction to Legal Positivism and Austin?s Model 3 2. Internal Aspect of Law 3 3. Hart?s Criticism of Austin?s Theory 3 4. Conclusion 3 5. References 3 1. Introduction to Legal Positivism and Austin?s Model Positivism stems from the Latin root ?positus? which means to firmly put in place the existence of something. Legal positivism is a thesis about the nature of law according to which: 1. All laws are laid down by a certain procedure or person. 2. Something only counts as a legitimate law once recognized by a particular procedure or person. In other words, the legitimacy of law solely depends on its sources rather than its merits (Lyons & Dworkin, 1977). This perspective was popular during the nineteenth century due to the command theories of law presented by Jeremy Bentham and John Austin. According to these theories, the law is the command of the sovereign, which is backed up by the threat of a sanction in the case of non-compliance. Law is the expression of a desire, (for example, ?I would like for you to file your returns by June 30th?) backed up by a form of punishment or force. ...read more.

What is not taken into consideration is the internal viewpoint, there is a person in that car that using the law to guide his or her actions. Since Austin did not consider the internal aspect of the law, one can reason that there are subjects that follow the law irrespective of sanctions. This is because internally, they have come to regard the law as necessary. The theory of command has been challenged because it presumes that sanctions are a necessary part of the law and are needed for the population to follow the law (Morris & Hart, 1962). However, Austin could argue that by including the internal aspect of law, one only brings the idea of morality to law which is otherwise best understood in value unbiased terms. Hart and Kelsen each gave different perspectives on the internal aspect of law. The concept was that legal theorists must understand law from an internal point of view, however, that point of view must not be so internal as to involve a moral aspect of the law. 3. Hart?s Criticism of Austin?s Theory Austin?s theory of command is an order backed up by a threat of punishment in the case of non-compliance. Nonetheless, not all laws fit this model. Austin?s model has a strong case in criminal law, however, what about other aspects of the law such as wills, contracts, and marriage? ...read more.

The sovereign cannot be a constructive metaphor since the command originates from him. Additionally, the emphasis on the term ?sovereign? makes it difficult to understand the continuity of legal systems. A new ruler will not come with the populations ?habit of obedience? that Austin deems essential for a system?s rule-maker. Some legal theorists defended Austin and argued that, by the term sovereign, Austin meant the office or institution which symbolizes supreme authority and not the individuals who happen to hold that office or hold that institution at any particular time (Woozley, Kelsen & Knight, 1968). 4. Conclusion The great strength regarding Austin?s definition of law lies with its simplicity. However, it is in this simplicity that the definition fails to capture aspects that we deem closely bound to the law. Various modern theorists believe that Austin?s definition of law captures the connection of law and power, and places the importance of that connection at the forefront of analysis. According to one supporter: ?Austin?s theory is not a theory of the Rule of Law: of government subject to law. It is a theory of the ?rule of men?: of government using law as an instrument of power. Such a view may be considered realistic or merely cynical. But it is, in its broad outlines, essentially coherent." (Cotterrell 2003: p. 70) When a situation requires a more realistic or critical approach to law, Austin?s definition of law and force is attractive (Brian, 2019). 5. ...read more.