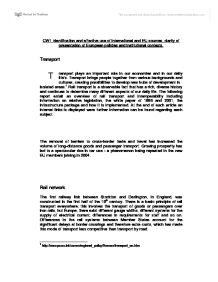 Identification and effective use of international and EU sources, clarity of presentation of European policies and institutional contexts.

CW1 Identification and effective use of international and EU sources, clarity of presentation of European policies and institutional contexts. Transport ransport plays an important role in our economies and in our daily life's. Transport brings people together from various backgrounds and cultures, creating possibilities to develop new hubs of development in isolated areas.1 Rail transport is a observable fact that has a rich, diverse history and continues to determine many different aspects of our daily life. The following report entail an overview of rail transport and interoperability including information on relative legislation, the white paper of 1996 and 2001, the infrastructure package and how it is implemented. At the end of each article an internet links is displayed were further information can be found regarding each subject. The removal of barriers to cross-border trade and travel has increased the volume of long-distance goods and passenger transport. Growing prosperity has led to a spectacular rise in car use - a phenomenon being repeated in the new EU members joining in 2004. Rail network The first railway link between Stockton and Darlington, in England, was constructed in the first half of the 19th century. There is a basic principle of rail transport everywhere; this involves the transport of goods or passengers over iron rails, but Europe, there exist different gauge widths, different systems for the supply of electrical current; differences in requirements for staff and so on. ...read more.

This directive requires Member States to create an organisation (Infrastructure manager) to allocate railway infrastructure capacity in a fair and non-discriminatory way. The directive also lays down a number of guiding principles for the charging of fees for infrastructure use. Member States must also ensure that the prices charged are market prices, and must not charge fees which are unfair or discriminatory. However, railway activities confined to urban, regional and suburban transport or road vehicle shuttle service through Channel Tunnel was not covered in this Directive. http://europa.eu.int/comm/transport/rail/overview/licence_en.htm The 1996 White Paper In 1996 the European Commission published a White Paper with a Strategy for Revitalising the Community's Railways. It proposed a new four-step plan towards the revitalization of the union's railway by: 1) Clarifying a division of financial responsibility between the state in order to relieve the railways debt and allow independent financial management. 2) Assuring provision of public service. 3) Closer coordination to integrate infrastructures, co-ordinate research and development, harmonise technical standards; 4) Designate a network of rail "freeways". Dealing with railways finances The commission proposes to report regular intervals on the progress made by member states in reducing debt and improving finances. However in the case of debts accumulated since 1993, the commission will authorise state aids if they are in accordance of the treaty. Introducing market forces into rail transport This is a key element of the proposed strategy to revitalise rail transport , the commission therefore proposes6; - Speed up modification of the existing EU legislation, (including rights to railway infrastructure for freight and for international passenger services (directive 91/440/EC)). ...read more.