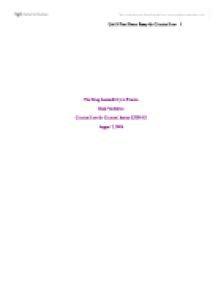 In today's world, the problems of drug access in prisons have increased dramatically. Visitors and staff are the main sources of the drugs because they have the easiest connections to the outside world.

The Drug Accessibility in Prisons Heidi VanMetre Criminal Law for Criminal Justice CJ230-02 August 7, 2006 In today's world, the problems of drug access in prisons have increased dramatically. Visitors and staff are the main sources of the drugs because they have the easiest connections to the outside world. Even though prisons have camera, a large amount of guards, and strip searches of the inmates after visitations, the prisoners have become intelligent enough to discover the secrets of getting drugs inside of prisons. Not only are drugs in prisons a threat to the other staff and inmates due to the diseases that get spread, they also become a "threat to the community because if an inmate does not stop their drug habits while incarcerated, they have greater of a chance at re-offending once released" ("Drugs in Prisons", 2005). Many people wonder how staff and visitors do not get caught with the drugs they bring inside of the prisons gates. Most are intelligent enough to know that when entering a prison one will be searched and patted down. So to get drugs inside of prisons "people bring them In body cavities, or carried in by staff who do not receive a search, and put in the false bottoms of shoes and on the back of envelope stamps" ("Drugs in Prisons",2005). A person will go through just about any type of measure to get drugs into a prison facility for extra cash and or ones own personal high. So how much does a typical drug cost in prison? In some prisons a "drug can be valued at more than five times their street value" ("Drugs in Prisons", 2005). Inside the world of a prison, some inmates struggle to make it each day, or try to hide their pain by taking drugs on the side. If a drug is available, inmates will find the money to pay for it no matter what the price may be. ...read more.

Sometimes they even pay quadruple the amount for a drug in prison than they are on the streets but the inmates think it is worth it. Visitors if inmates are known to be one of the largest reasons of why the drugs are getting in the doors to begin with. "Most drugs are brought in my visitors because they have easier access to the outside world and the newest ways to pass the drugs though prison securities" (Carrol, 1998). Visitors are known to bring drugs into the inmates in different ways. Usually the visitor is aware of the searches and the pat downs that go on before they can visit an inmate, therefore they make sure that the drugs they are bringing in will not be found. "Some visitors pass drugs to an inmate by swallowing a balloon or condom filled with drugs and regurgitating it in the rest room" ("Drugs Getting into Prisons despite Interdiction Efforts", 2001). If the visitors swallow the drugs, they will not get caught because the drug will not be found. When visitors work in this type of manner it makes it a lot easier for them to get the drugs within the prison without being caught. Visitors bring the drugs in for different reasons such as it may be a profit for themselves, the inmate may be a loved one and they are doing it because they asked them to, or they may have even be threatened to do so. "Inmates may try to force visitors to smuggle drugs into the prisons, using manipulation, threats, violence and blackmail" ("Drugs in Prison", 2005). The prisons are already aware that people may only be bringing drugs into these facilities by threats; therefore they have hotlines made to people to report this information about an inmate to them. If someone is caught bringing drugs into a prison, they will receive a prison sentence themselves because it is a felony to traffic drugs, let alone through a prison setting. ...read more.

As long at the source is out there and the inmates have access, they are going to continue using. The investigators are allowed to use drug-sniffing dogs and cameras in their investigations to catch who all is involved in the drug wars. "In close custody facilities, cameras are discreetly placed in the visiting areas in such a manner as to permit easy and close-in monitoring of all visitors. The rooms where inmates are strip-searched after visiting are electronically monitored to ensure that officers assigned this onerous task carry it out properly. The cameras are so powerful that one can read a paperback book being read by an officer at a table in the visiting area" (Carrol, 1998). These methods of prevention are taken to try and stop drugs from getting inside the walls of prisons. These cameras come in use to help not only with the dishonest workers, but with the inmates doing their illegal acts as well as visitors. The more powerful the camera, the more it will catch the inmates doing that the guards are unable to do. The accessibility of drugs in prisons has gotten so large in the last few decades that investigative units have been made to try to solve these issues. Drugs are getting smuggled into prisons by visitors, guards, and other inmates very ones own high, the money, or because they had to act on a threat. A majority of the inmates in prison that carry the HIV/AIDS virus were injection users of drugs. Most inmates who inject the drugs share their needles with other inmates, which is how the drugs spread. Visitors are even going as far as swallowing a balloon or condom full of drugs and then regurgitating it once they get into the prison visiting area. Staff members are bringing the drugs in usually for an extra profit for themselves. The accessibility of drugs in prisons will not stop until the prisons figure out who the sources are that are smuggling the drugs behind prison gates. ...read more.