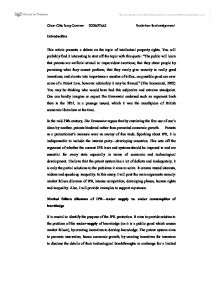 Introduction This article presents a debate on the topic of intellectual property rights. You will probably find it interesting to start off the topic with this quote: "The public will learn that patents are artificial stimuli to improvident exertions; that they cheat people by promising what they cannot perform; that they rarely give security to really good inventions, and elevate into importance a number of trifles...no possible good can ever come of a Patent Law, however admirably it may be framed." (The Economist, 2002) You may be thinking who would have had this subjective and extreme standpoint. One can hardly imagine or expect The Economist endorsed such an argument back then in the 1851, in a passage issued, which it was the mouthpiece of British economic liberalism at the time. In the mid-19th century, The Economist argues that by restricting the free use of one's ideas by another, patents hindered rather than promoted economic growth. Patents as a protectionist's measure were an enemy of free trade. Speaking about IPR, it is indispensable to include the interest party-developing countries. This sets off the argument of whether the current IPR laws and systems should be imposed in and are essential for every state especially in terms of economic and technological development. I believe that the patent system has a lot of defects and inadequately, it is only the partial solutions to the problems it aims to solve. ...read more.

And in some occasions, even the economic welfare is not optimized. There should be no circumstances in which the most fundamental human rights should be subordinated to the requirements of IPR protection. It is not just that the western patent rules exploit the human rights for instance by prevent poor people from getting life-saving drugs, interfere with age-old farming practices etc. (economist) Nowadays, most IP rights are treated as economic and commercial rights, and are more often held by companies rather than individual inventors. This contributes to the proliferation of global inequality that we can see in the fastest rate than at any time in history. The distributional impact of intellectual property rights and the social welfare costs are constantly enlarging. Therefore, rich countries should take into consideration of how IPR protection potentially affects the poor countries. Higher IP standards should not be pressed on developing countries without assessing their impacts on the society and poor people. Developing countries and phases of development Is IPR system the only essential tool or a major tool to stimulate economic growth and innovation? Is it necessary for countries to adapt to it? America advocates that patents can help to foster growth in poor places, stimulate domestic innovation, enhance foreign investment and gain access to new technologies. '(The Economist, 2002) In reality, there is little evidence to show that marginalized places which introduce robust IP protection can benefit from it. ...read more.

Hence, universal, one-size-fits-all patents should not be applied to all countries which were proposed to be enacted and enforced since 2006. Conclusion All in all, patent systems can be a tool of economic growth effectively when flexibility is given and used properly which adapt according to the objective assessments of different countries. There are a few concerns that I addressed in the essay, market failure dilemma of IPR, intense competition, human rights and inequality, prevention of technological transfer, developing countries and phases of development. The existing IPR laws and systems are almost certainly unsustainable in the long run, diverse set of economic instruments to reward invention and research is needed. Here are two solutions other than IPRs: -Set up one-off payment as a state prizes and innovation to reward the inventor for producing a socially useful invention, this can solve the competition intensity problem because the prize is to individuals instead of the companies -In developed countries, incentives can be given to promote technological transfer, for instance by tax exemptions for companies that license technology to developing countries. Reference: 1. -The Economist (2002) , Imitation v inspiration ---How poor countries can avoid the wrongs of intellectual-property rights, retrieved 12th Sep, 2002, http://www.economist.com/node/1325360 2. - The Economist (2002) Patently problematic--An important new study shows the promise, and pitfalls, of intellectual-property rights for the poor , retrieved 12th Sep, 2002, http://www.economist.com/node/1325219?Story_ID=1325219 3. - O. Abroad (2009), Intellectual property and market failure, Retrieved from http://www.owen.org/musings/ip 4. Development policy integrating IPR, Commission on IPR website, and Retrieved Sept 2002 http://www.iprcommission.org/papers/pdfs/final_report/CIPR_Exec_Sumfinal.pdf ?? ?? ?? ?? Chan Chiu Tung Carmen 2008677665 Trade law final assignment ...read more.