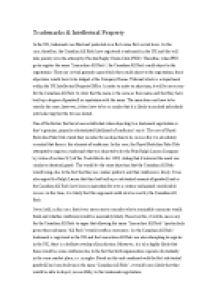 ﻿Trademarks & Intellectual Property In the UK, trademarks are filed and protected on a first-come first-served basis. In this case, therefore, the Canadian All Reds have registered a trademark in the UK and this will take priority over the attempt by Preston Rugby Union Club (PRU). Therefore, when PRU go to register the name ?Lancashire All Reds?, the Canadian All Reds could object to the registration. There are several grounds upon which they could object to the registration; these objections would have to be lodged at the Company Names Tribunal which is a department within the UK Intellectual Property Office. In order to make an objection, it will be necessary for the Canadian All Reds to show that the name is the same as their name and that they have built up a degree of goodwill or reputation with the name. The name does not have to be exactly the same; however, it does have to be so similar that it is likely to mislead individuals into believing that the two are linked. One of the factors that have been established when objecting to a trademark registration is that ?a genuine, properly substantiated likelihood of confusion? exists. The case of Royal Berkshire Polo Club stated that, in order for an objection to be successful, it is absolutely essential that there is this element of confusion. ...read more.

The logo is not registered and therefore the action open to the Canadian All Reds would be either passing off or design right infringement. Design rights protect the unique shape or design of a product and not the two dimensional shape. For example, in this case, the actual design of the scarves could be protected and the Canadian All Reds could bring an action against John in relation to the scarves, alongside any action being brought in relation to the logo itself. Design rights are not registered; they are automatically vested in a new design when it is recorded in material form. The Canadian All Reds, therefore, need to ensure that the design right in the merchandise is vested in them, before they become available to the public. This will be the evidence required in order to ensure that an action against John is possible. It should be noted that design rights only exist in the UK and although international recognition is possible, it is not offered as standard. Clothing is capable of gaining design right protection as held in the unreported case of Jo-Y-Jo Ltd v Matalan, in 1999, where knitted vests were held to have design right protection. Alternatively, the Canadian All Reds could bring an action for passing off as defined in Reckitt & Colman Ltd v Borden Inc[1], which they would be able to bring if they could prove that they have built up goodwill in their logo and that the logo of PRU was established and could be a misrepresentation which would confuse consumers. ...read more.

When considering all factors including the look of the scarves, it is more likely that the court will deem the scarves with the words ?All Reds? written on them to be more deceptive than the plain scarves. A similar case was seen in Arsenal Football Club v Matthew[2] Reed. In this case, Mr Reed was selling unofficial merchandise such as scarves and hats that included marks similar to those of the Arsenal crest and logo. Arsenal brought an action for trademark infringement against Mr Reed, but Mr Reed argued that he was not using the mark as a trademark and was using it, rather, as merchandising, despite the fact that it was accepted that the customers did not necessarily think that the goods had come from the club, but rather that is was a ?badge of support, loyalty or affiliation?. It was held, in this case, that it could be a trademark infringement where the use of the mark undermined the essential function of a trademark and that by allowing the merchandise to be sold, it would mean that the function of a trademark was a way of identifying origin. The judge stated: ?As the ECJ pointed out, the actions of Mr Reed meant that goods not coming from Arsenal but bearing the trademarks, were in circulation. That affected the ability of the trademarks to guarantee the origin of the goods?. Based on this, it is expected that the Canadian All Reds could rely on this case to prevent John from selling the merchandise. ...read more.