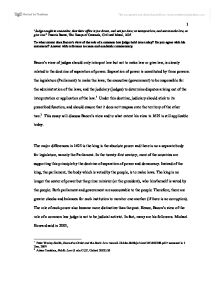 Judges ought to remember, that their office is jus dicere, and not jus dare; to interpret law, and not to make law, or give law.To what extent does Bacons view of the role of a common law judge hold true today? Do you agree with his statemen

"Judges ought to remember, that their office is jus dicere, and not jus dare; to interpret law, and not to make law, or give law." Francis Bacon, The Essays of Counsels, Civil and Moral, 1625 To what extent does Bacon's view of the role of a common law judge hold true today? Do you agree with his statement? Answer with reference to cases and academic commentary. Bacon's view of judges should only interpret law but not to make law or give law, is closely related to the doctrine of separation of power. Separation of power is constituted by three powers: the legislature (Parliament) to make the laws; the executive (government) to be responsible for the administration of the laws; and the judiciary (judges) to determine disputes arising out of the interpretation or application of the law.1 Under this doctrine, judiciary should stick to its prescribed function, and should ensure that it does not trespass onto the territory of the other two.2 This essay will discuss Bacon's view and to what extent his view in 1625 is still applicable today. The major differences in 1625 is the king is the absolute power and there is no a separate body for legislature, namely the Parliament. In the twenty-first century, most of the countries are supporting this principle by the doctrine of separation of power and democracy. Instead of the king, the parliament, the body which is voted by the people, is to make laws. ...read more.

concurring judges in Roe might believe that they have the moral obligation and just to grant pregnant women a right to abortion, such decision however, is based on their personal perception of what is fair and just. Lord Diplock should condemn such decision. In Duport Steels Ltd v Sirs10, he said, "where the meaning of the statutory words is plain and unambiguous it is not for the judges to invent fancied ambiguities as an excuse for failing to give effect to it plain meaning because they consider that the consequences of doing so would be inexpedient, or even unjust or immoral". Hence, they should not have authority over law making but the Parliament, the public elected body, to make these kinds of controversial decisions. The progressive approach of these bolder judges may damage the predictability and certainty of the common law system. How about when the legislation is obscured or ambiguous, or leads to an absurd result? Bacon shall support judges to interpret and apply the law in its original spirit. In R v Allen11, the Court applied the mischief rule which focuses on the legislature's intention. It considered a report of the Criminal Law Revision Committee in order to discover the mischief of the Divorce Act and convicted Allen with bigamy. In Royal College of Nursing v DHSS12 case, Diplock used the Mischief approach of statutory interpretation. He recognised it is a long and expensive process to pass and amend the law13. ...read more.

On the other hand, judges also got to adhere precedent from a higher court, or they may be called judicial activists. One famous case of judges accused of "usurpation of the legislative function" is Lawrence v Texas18. It was held that consensual same-sex sexual activities are illegal based on Georgia's sodomy statute in Bowers v Hardwick19. However, Texas Court of Appeals referred to Bowers and held that the statute is unconstitutional. The ratio adopted by the court is that it has an obligation to define the liberty of all, not to mandate its own moral code. It seems to be no judicial activism, but based on the doctrine of stare decisis, judges should strictly uphold the previous decision made. In today's Hong Kong, the enormous growth of social dissent due to the undemocratic government raise the demand of the judiciary to take a more creative role in statutory interpretation. The growth of judicial review in the courts has increasingly questioned the use of powers conferred by the Legislative Council and the Government. This includes: reclamation of Victoria Harbour; public housing rental review; the Link REIT listing, etc. However, Hong Kong judges still seem very reluctant to go for the kind of judicial activism considered rampant in the US20 because it is impossible to approach the task by soliciting views from the public on what the law ought to be. In conclusion, judges can no longer claim that their function is a purely mechanical one of 'discovering' and 'applying'. ...read more.