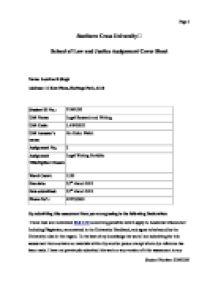 One of the most significant changes to the doctrine of precedent that applies to the Australian courts derives from the changing status of the English judicial decisions.

Southern Cross University? School of Law and Justice Assignment Cover Sheet Name: Lourine K Singh Address: 11 Kew Place, Heritage Park, 4118 Student ID No.: 21961395 Unit Name: Legal Research and Writing Unit Code: LAW00051 Unit Assessor's name: Ms Helen Walsh Assignment No.: 2 Assignment Title/Option Chosen: Legal Writing Portfolio Word Count: 1350 Due date: 23rd March 2012 Date submitted: 23rd March 2012 Phone No*.: 422733930 By submitting this assessment item you are agreeing to the following Declaration: I have read and understand Rule 3.18 concerning penalties which apply to Academic Misconduct Including Plagiarism, as contained in the University Handbook, and agree to be bound by the University rules in this regard. To the best of my knowledge the work I am submitting for this assessment item contains no materials written by another person except where due reference has been made. I have not previously submitted this work or any version of it for assessment in any other unit offered by Southern Cross University or any other institution. I declare I have kept a copy of this assignment. TASK 1 Part A: Footnotes 1. Richard Edney, Mirko Bagaric, Australian Sentencing: Principles and Practice (Cambridge University Press, 2007). 2. Dietrich v Regina (1992) 177 CLR 292. 3. Jethro K Lieberman, 'Bad Writing: Some Thoughts on the Abuse of Scholarly Rhetoric' (2008) 49 The Australian Legal System: History, Institutions and Method cited in Russell Hinchy, New York Law School Review (Pearson Education Australia, 2004) ...read more.

This shows that when judges show their discretion and flexibility in the common law system by departing the doctrine of precedence and accepting and acknowledging community values and policy choices it does affect the doctrine of precedence.5 The constant tension between continuity and the change of law is another factor that affects the doctrine of precedence, as reflected in a debate seen in the 2003 Hamlyn Lectures.6 Hon. Justice Kirby states in the lecture that ''Somewhere between the spectre of a judge pursuing political ideas of his or her own from the judicial seat irrespective of the letter of the law, and the unrealistic mechanic deified by the strict formalists, lies a place in which real judges perform their duties: neither wholly mechanical nor excessively creative''. It also shows that society changes and the law needs to change along with it in order to work effectively. Finally, another factor that affects the doctrine of precedence in Australia is the shift towards statute law. The common law today operates in orbit of statute law.7 The statutory provisions which the judicial interprets is said to have bind the courts below in order to have the same meaning to the words in question, however, if the same type of expression is seen in a different statute then the courts are bound by precedence and will ordinarily seek to apply similar principles to the new setting.8 TASK 3 Part A: Paraphrasing There is an Australian debate concerning the application of the doctrine of precedence to which the discussed subject is about the judicial method. ...read more.

This law is applicable only when 2 or more obstructing woody perennials that grow to form a hedge of at least 2.5 metres height. If you do make an application the court will then consider whether the trees existed prior to the dwelling, whether they have any historical, cultural, social or scientific value and the amount and also the court will take into account the hours per day, time and year of any sunlight that is lost as a result of the obstruction. It should be remembered that this very same law also tells you to give 21 days notice to your next door neighbour that you are lodging an application and what you are seeking. The court will only grant you remedy if you have tried to make a reasonable effort to reach an argument with the party involved. Slick and Slack Lawyers are aware that you have engaged in an effort to approach your neighbour in a non-confrontational manner, this gave the appearance that the matter may have been sorted, however, the other side failed to do as they perceived you to be a menace. There is now an AVPO against you. As this matter has now led to more problems with your neighbour, we strongly recommend that you do not go anywhere near your neighbour. Going forward, get back to us with what you think we should do in relation to the second matter about the hedge of trees including if you would like us to launch an action in court about your matter. ...read more.