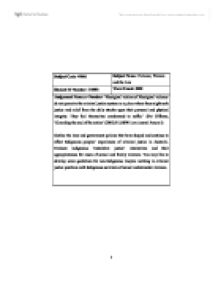 Outline the laws and government policies that have shaped and continue to affect Indigenous peoples experiences of criminal justice in Australia. Evaluate indigenous restorative justice alternatives and their appropriateness for cases of sexual a

Subject Code: 40066 Subject Name: Violence, Women and the Law Student ID Number: 270983 Word Count: 5000 Assignment Name or Number: 'Aboriginal victims of Aboriginal violence do not perceive the criminal justice system as a place where they might seek justice and relief from the daily attacks upon their personal and physical integrity. They feel themselves condemned to suffer.' (Pat O'Shane, 'Corroding the soul of the nation' (2002) 8 UNSW Law Journal Forum 5) Outline the laws and government policies that have shaped and continue to affect Indigenous peoples' experiences of criminal justice in Australia. Evaluate indigenous 'restorative justice' alternatives and their appropriateness for cases of sexual and family violence. You may like to develop some guidelines for non-Indigenous lawyers working in criminal justice positions with Indigenous survivors of sexual and domestic violence. VIOLENCE, WOMEN AND THE LAW I. INTRODUCTION Australia's laws and criminal justice system do not adequately address the issue of violence against indigenous women in their own community. Law and policies developed fail to adequately address the complexity of Aboriginal communities and value systems because they have been created without appropriate consultation or involvement of indigenous people. Further action is required to develop restorative justice alternatives, and to develop a set of guidelines to educate non-indigenous lawyers in dealing with victims. These tools must focus on the unique needs and sensitivities of women who have been victims of, or are experiencing violence in order to prevent and redress this 'corroding of the nation'. The paper focuses on the vastly under developed, yet vital role played by Australian law and policies that prevent and redress violence against aboriginal women in the indigenous community. In contrast to frameworks protecting the rights of Indigenous in other nations, the laws in Australia do not operate sufficiently to address the unique issues faced by Aboriginal women confronted by violence from within their own communities. There is an outstanding need for a pro-active approach to reform the criminal justice system and implement legislation to preserve Aboriginal womens' rights. ...read more.

The Law Reform Commission of Western Australia found that 'many Aboriginal people feel that the language used in court makes no sense'.17 An Aboriginal person from the Northern Territory felt that, 'Dealing with whitefella law is like falling into a big, black hole and you can't get out'.18 Differences in methods of resolving disputes can also contribute to the feeling of falling into a big black hole. In Aboriginal communities disputes are resolved in the open not hidden behind closed doors and involve not just the parties themselves but the local elders as well in order to mediate and decide upon an appropriate agreement. Though these customary dispute resolution processes may not be fast and efficient but once an outcome is reached that is the end of the matter it is not carried on and is never mentioned again. In this way the court system could also be alienating for Aboriginal women19 as a matter is carried on over a lengthy process and does not necessarily end once the perpetrator is punished as there could be an appeal or they may come into contact with them when they are applying for release, in this way a matter is never really over it is just a stop start process that can span over a number of years. Although customary law processes are not necessarily immediate, once completed (because the purpose is the restoration of peace) the matter is at an end. Aboriginal people stated that they do not understand why the court process takes so long. Aboriginal people consulted by the Law Reform Commission of Western Australia commented that it was 'difficult to understand the effect of a prior criminal record as once a matter is resolved by tribal punishment everyone is equal afterword'20. O'Shane believes responsibility should fall on all levels of government to address the issue. In addressing violence against Aboriginal women the process usually begins and ends with the criminal justice system.21 Yet when Aboriginal women are required to turn to European ...read more.

The essence of the program must be to provide support to the victim, offender and community to heal the harm caused by sexual assault. One key element of the program would be that the perpetrator must be willing to genuinely acknowledge responsibility in order to demonstrate remorse principally to the victims but also to the community, this 'shaming' mechanism is required in order for the perpetrator to provide adequate restitution. The process would be a combination of negotiation and mediation in order to provide each concerned party an opportunity to have their say in an environment that is personal and meaningful to them. The venue does not need to be a conference room it could be a room within a local organisation or perhaps such as the former Maya Healing Centre36, it would provide an open forum in an environment that included Aboriginal artworks and comfortable furniture. By having a venue each party feels comfortable in and feels their cultural identity is being recognised. Such a venue would provide reinforcement that parties are encouraged to present their views which would give the offender the unique opportunity to feel and see the harm they have caused which can work towards behavioural and attitudinal change. Additionally, by conducting the program in an Aboriginal venue controlled by Aboriginal people it will lend the community the sense that they are seeing and feeling real change that will contribute to the balance of harmony within their community. VI. CONCLUSION The sexual abuse of Aboriginal women cannot go unnoticed or dismissed as an 'Aboriginal problem' it is a problem for the whole of society. The criminal justice system is not equipped to deal with the cultural issues that lead to such abuse. A new approach is required one that recognises the needs of the victims and empowers the Aboriginal community to rejuvenate their cultural lore. By empowering the community to develop an approach that they believe will work and fits their needs we will see results. ...read more.