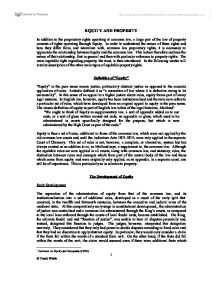 EQUITY AND PROPERTY In addition to the proprietary rights operating at common law, a large part of the law of property consists of rights operating through Equity. In order to understand the nature of these rights and how they differ from, and interrelate with, common law proprietary rights, it is necessary to appreciate the relationship between Equity and the common law. This lecture therefore outlines the nature of that relationship, first in general and then with particular reference to property rights. The main equitable right regarding property, the trust, is then introduced. In the following weeks will involve description of the other main types of equitable property rights. Definition of "Equity" "Equity" in the pure sense means justice, particularly abstract justice as opposed to the accurate application of rules. Aristotle defined it as "a correction of law where it is defective owing to its universality". In this sense of an appeal to a higher justice above rules, equity forms part of many legal systems. In English law, however, equity has been institutionalised and the term now refers to a particular set of rules, which have developed from an original appeal to equity in the pure sense. ...read more.

Other cases dealt with by the medieval Court of Chancery included those related to matters of relief from the consequences of fraud, or of accident, or of the lack of the formalities required at common law.. The Relationship of Equity to the Common Law The jurisdiction developed by the Court of Chancery did not contradict that of the common law, it was a matter, even as predictable rules developed, of a need to apply additional, rather than substitute, rules in order to achieve equity. The relationship between the Court of Chancery and the Common Law courts was well stated by Lord Ellesmere LC in The Earl of Oxford's Case3: "The cause why there is a chancery is, for that man's actions are so diverse and infinite, that it is impossible to make any general law which may aptly meet with every particular act, and not fail in some circumstance........The office of the chancellor is to correct men's consciences for frauds, breaches of trust, wrongs and oppressions, of whatsoever they may be, and to soften and mollify the extremity of the law......when a judgement is obtained by oppression, wrong or hard conscience, the chancellor will frustrate it and set it aside not for any error or defect in the judgement, but for the ...read more.

This part of the jurisdiction also often involved issues about property. After the period of development in the eighteenth century, the long tenure as Lord Chancellor of Lord Eldon8 at the beginning of the nineteenth century was a period of consolidation. It also saw the introduction of a formal system of precedent within the Court of Chancery.9 Equity thus now became a firmer body of rules, complementary to those of the common law, rather than the Court of Chancery applying abstract equity as a court of conscience. This did not mean, however, that development totally ceased. One of the major equitable doctrines in relation to property, that of the restrictive covenant, developed in the mid-nineteenth century.10 1 Lectures on Equity (ed Brunyate) (1936) 2 The Chief Minister, who was, in the middle ages, invariably in holy orders 3 (1615) 1 Ch. Rep 1 4 LK = Lord Keeper (of the Great Seal). Sometimes in the seventeenth and eighteenth centuries, no Lord Chancellor was appointed but a Lord Keeper filled the judicial functions of the Lord Chancellor 5 (1705) Pre.Ch. 241, 244 6 1673-1682 7 1737-1760 8 1801-1805; 1807-1827 9 see Gee v Pritchard (1818) 2 Swans 402 10 Tulk v Moxhay (1848) 2 Ph. 774 1 1 (c) Frank Webb ...read more.